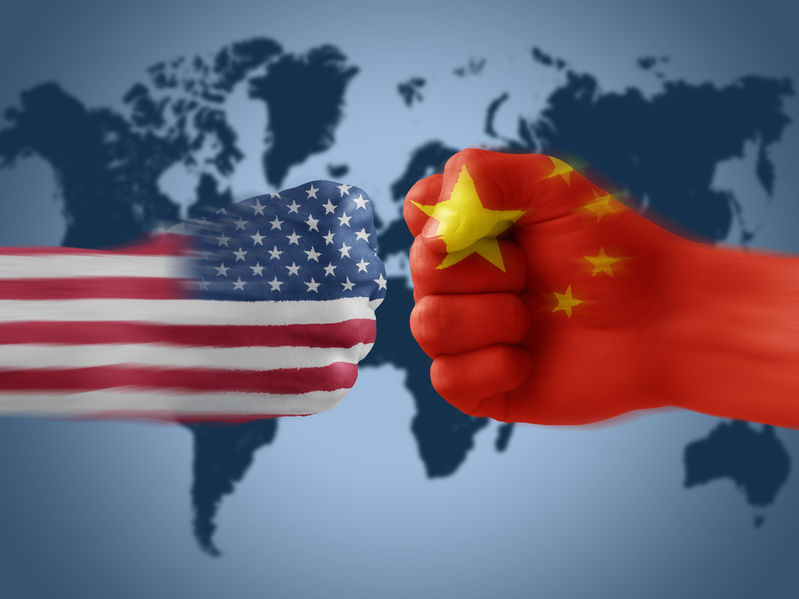 In mid-January 2018, the US president declared the trade war against China with the announcement of the tariff tax of 20% for imports of washing machines and 30% for solar panels. In March, he applied a tax on steel imports of 25% and aluminum of 10%. After that, since April, the US and China are engaged in the biggest trade war in history. With reprisals taken by China to each aggression. In December 2018, under the G20’s framework in Buenos Aires, the two countries agreed on a 90-day truce to the tariff aggressions and began talks to negotiate an agreement.

The bottom line is that the US external deficit has been growing steadily for two decades. Since China opened its international trade in 1990, the US decided to use outsourcing and manufacturing in areas of export processing in China to reduce costs. Everything indicates that China has done reverse engineering to the products that were manufactured in these areas and have managed to develop their own technology; it was the same road that Japan used first and then South Korea. The consequence is, added to its educational policy, that China is now at the forefront of global technological innovation. The example is the 5G network.

Between April 2018 and February 2019, there have been four rounds of tariff increases between both countries and the impact has been counterproductive for the aggressor. US exports to China have decreased by 13% between February and November 2018, while imports have increased by 16% in the same period (see chart below). 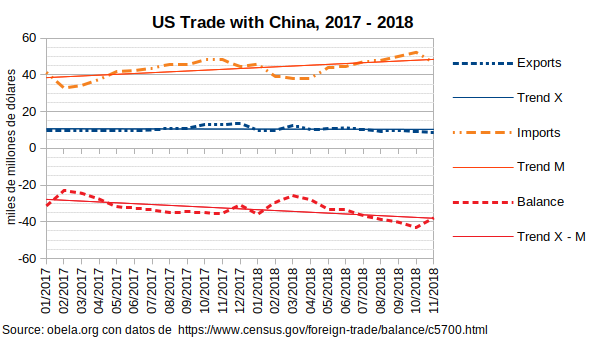 The US balances are: an increase in the trade deficit; an extension of the decline in commercial competitiveness; and a decrease in their productivity, caused by the increase in prices of imported intermediate products. US companies buy their parts and pieces in China, now taxed by the American government, while the Chinese tax final products that, finally, could stop importing.

Following the decree of the tariff truce, negotiation rounds were initiated. The first meeting between the US trade representative, Robert Lighthizer, and the Chinese Vice Premier, Liu He, was held in Washington on January 30 and 31, 2019. The second meeting of negotiations was held in Beijing, February 14 and 15, and the mood, according to the statements of the US executive, seems more positive. A final meeting is still awaited in the last week of February. The agreed threshold is March 1. If to date no commercial agreement has been reached, the US warned that it will proceed to raise tariffs on Chinese imports from 10% to 25% percent, equivalent to an additional 200 billion dollars.

The core of the American demands are: an increase in China’s imports of US products; increase protection of intellectual property; put restrictions on China’s investment in technology; strengthen regulation in technology transfer; address cybernetic protection and regulation; and to lesser extent issues related to agriculture, subsidies and services. At the heart of this are the loss of technological competition and the fall in productivity of the US economy. These demands are impossible to fulfill because China has a productive policy for decades and understands that, in the free market, the strongest wins. They are now the defenders of this.

An expression of the real condition of the loss of American competitiveness are the lawsuits and attacks against the Chinese telecommunications company Huawei. The arrest of Meng Wanzhou, its CFO, and daughter of Ren Zhengfei, president of the company, claiming illegal trade with Iran, theft of technology and copyright infringement, is actually an attempt to block the sale of the 5G network, in the market since October 2018. This technology corresponds to the fifth generation of the internet network, the wireless connectivity of objects and telecommunications. Its implementation allows connectivity 100 times greater than 4G, which will revolutionize the internet of things. The 5G is a new technological paradigm to which the US has arrived late with the company AT&T.

In the Huawei case, the US has boycotted the 5G with missions to the countries that are considering their purchase and has managed, in the name of American national security, that Germany, England, Australia, and New Zealand do not buy from Huawei. AT&T should get its 5G soon while in China it is already operational. The new Huawei phones are already for the 5G network. Most likely, the US will continue to stalk the Chinese and Huawei economy specifically. The underlying problem is: how far will the US take its lack of competitiveness and technological delay, accusing others of her own problems? How long will the US blame the rest of the world for her over-consumption?

Oscar Ugarteche is a senior researcher at the Institute of Economic Research, National Autonomous University of Mexico (UNAM), Mexico. He is also the coordinator of the Latin American Economic Observatory (www.obela.org). Armando Negrete is a Ph.D. student in Latin American Studies at UNAM.