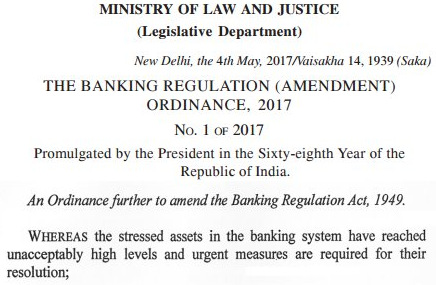 The recently issued Banking Regulation (Amendment) Ordinance is perceived by many as a magic bullet to resolve the NPA crisis that has overtaken the banking sector in India. The Ordinance authorises the Reserve Bank of India (RBI) to initiate insolvency resolution in respect of a defaulting company under the Insolvency and Bankruptcy Code, 2016, to issue directions to banks to resolve their stressed assets and institute committees to “advise” banks on resolution of stressed assets.

While the Ordinance certainly empowers the RBI to initiate insolvency proceedings against the defaulters, it also erodes RBI’s role as an independent regulator by involving it as a facilitator and an adviser in the process of dealing with the defaults.

The Gross Non-Performing Assets (GNPA) of the public sector banks (PSBs) have surged to a mind boggling level of Rs 6,14,870 crores, which, on the average, constitute 11% (GNPA Ratio) of their Gross Advances. RBI’s Financial Stability Report suggests that the GNPA Ratio may increase to 12.5% this year and 12.9% next year, which could increase further “under a severe stress scenario”.  Adding to these woes has been the adverse impact of demonetisation on many SMEs. Certainly, it is high time that the government does everything within its ability to tackle this crisis on a war footing. To this extent, the Ordinance issued is welcome but it can at best be a palliative, not a lasting cure.

To understand the genesis of the NPA problem, one should analyse the factors that have contributed to this unprecedented situation.

Macro-economic forces that lie beyond the control of the loanees could explain the NPAs to some extent, not fully. Lack of prudence in sanctioning of loans and outright fraud in some cases cannot be ruled out. Once there is a loan default in the case of a large corporate entity, the bankers have often provided different forms of debt recast concessions but each such concession has only further incentivised malfeasance and accentuated the problem, not mitigated it.

To appreciate why this happens, one should recognise the circumstances under which the public sector banks function. In the crony capitalist environment that prevails today, it is the influential corporate entities that dictate the terms and any banker who insists on prudence in the matter of sanctioning loans is likely to invite the wrath of the rulers.

It is in public knowledge that about 50 to 100 influential corporate defaulters are the major contributors to the NPA crisis. Had the government and the RBI dealt with them firmly on time, the crisis would not have arisen in the first instance. Many of them, despite their negative debt service capability, have continued to receive acreages containing valuable natural resources such as hydrocarbons, coal and other minerals and scarce resources such as spectrum. Having taken credit for “successfully” auctioning those resources, the government will now find itself in a tight corner to allow the RBI, in pursuance of the latest Ordinance, to initiate “insolvency resolution process” against any of those corporate entities.

There is another factor that has weakened the functioning of the banking sector in general and the public sector banks in particular. That revolves around the way the regulatory environment has evolved and the conflict-of-interest situation that pervades the banking sector.

For example, the composition of RBI’s Central Board, as envisaged under Section 8 of the RBI Act, is somewhat open ended and, if one were to look at it as it stands today, some members of the Central Board are also a part of the management of the institutions that RBI is required to regulate. There are some who are concurrently on the Boards of corporate entities which are perhaps a part of the NPA problem itself. A senior member of the RBI on the other hand sits on the Board of the SBI which is the largest public sector bank in India and has to its credit NPAs totalling upto more than Rs 1,00,000 crores. Under these circumstances, it is difficult to expect the RBI to function as an independent regulator.

While the government is no doubt the majority shareholder of the public sector banks, the fact that the officers of the government sit on the Boards of the PSBs can sometimes raise questions of conflict of interest, especially in an environment in which there is an unholy nexus between the corporates and the government.

The concept of “independent” directors, as envisaged in the Companies Act, is intended to ensure good corporate governance in the banks in the interests of the shareholders. In practice, however, this concept has degenerated into arbitrariness leading to non-professionals, often having questionable political affiliations, being appointed as independent directors of many PSBs. This has eroded prudence in decision making in many public sector banks.

To address the vexatious problem of NPAs in the banking sector, the government will therefore have to examine the need to remove the conflict-of-interest situations in the sector by amending the relevant laws. The government will also have to bring in an attitudinal change in its relationship with the management of the public sector banks.

More important than all these changes is that the government should realise the long-term cost of crony capitalism. If the banking industry is to function in good health, the RBI should emerge as an independent regulator without being hampered by conflicts of interest and the public sector banks should function as professional financial institutions insulated from the whims and the fancies of the political leadership. Unless the government proceeds quickly to bring in such changes, the impact of the latest Ordinance will remain short-lived.