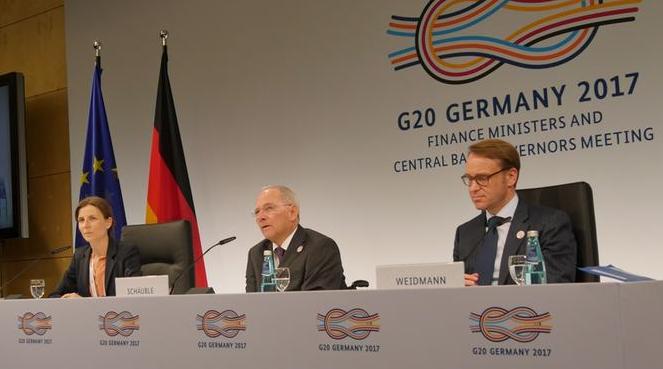 The health spa and casino complex in Baden-Baden in Germany was the venue for two-day meeting of G20 finance ministers and central bank governors held on 17 and 18 March. Baden-Baden is better known as a luxurious spa town with expensive shops and Konditoreien (pastry shops), where rich Russians and others like to spend their (laundered or tax evaded) money. However, the G20 ministers and governors did not come to clean up the place, although that could have easily been done by the massive security services present.

The G20 finance ministers and governors have been meeting regularly since the financial crisis in 2008 to decide on some measures to reform the financial system and avoid another crisis. This time the German presidency and the Financial Stability Board (FSB) had to press the ministers to make sure that at least they were implementing the agreed reforms. More than eight years after the financial crisis, some of these reforms are not yet fully in place and others have been weakened.

In Baden-Baden, little was discussed by the ministers and governors about the remaining financial stability risk, although they promised to deal with risks of shadow banking, derivatives markets and too volatile or manipulated exchange rates. However, at the same time they promoted the free flow of capital which supports all these risks. The final communiqué made at least some commitment to implementing measures to tackle tax evasion and tax avoidance as proposed by the Organisation for Economic Co-operation and Development – OECD (the so-called BEPS/Base Erosion and Profit Shifting Action Plan).

For the first time, free trade was a major issue of conflict between the US and the rest of the G20 countries, since the US did not want to commit to a rules-based trade system, but a fair trade system in the way President Trump interprets it. Strangely, there was no discussion about financial services in free trade agreements, which also shape the global financial system and its riskiness. The US also managed to keep out any financing to address climate change!

The financial lobby had done its best to have its positions heard by the finance ministers. The very well organised and experienced global financial lobby club – the International Institute of Finance (IIF) – held a conference two days before the ministers’ meeting. The conference was sponsored by ING and Deutsche Bank, which guaranteed they had their respective CEOs and board members on the panels. However, it was the first time this kind of conference was co-organised with the German government – a real example of corporate capture.

The ministers of finance of Brazil, Canada and South Africa came to speak and to be interviewed at the IIF conference. Even German Minister Schäuble came to Frankfurt especially for this meeting, while he was being pressed to meet the US delegation in Berlin. In contrast, he had already declined to come and address the civil society summit on 18-19 June 2017. The German President of the central bank and Christine Lagarde, who heads the International Monetary Fund (IMF), also had an on-stage conversation at the IIF. So, it was not surprising to see that the ministers and governors declared that they wanted the FSB to consult about, and review, the financial reforms and their unintended consequences, something the financial lobby had been pressing very hard for.

The G20 ignored many, if not all, of the recommendations made by civil society, who wanted further reforms such as better overall supervision, a diversified banking sector, cancellation and avoidance of over-indebtedness – all necessary measures to stop tax evasion and avoidance, etc. Protest actions were organised in Baden-Baden against the lack of measures to stop tax evasion, indebtedness of developing countries and the lack of democracy that constitutes the G20 (a limited group of countries with no accountability). Even the church protested by loudly ringing its bells next to the casino for 15 minutes before 700 people attended a service on debt cancellation.

The day after the G20 event, the Casino Baden-Baden opened again as usual for public. On the following Monday, the financial markets continued to their casino-like trading activities, without any consideration of their impact on the people or the planet.

Myriam Vander Stichele is Senior Researcher at the Amsterdam-based SOMO (Centre for Research on Multinational Corporations).