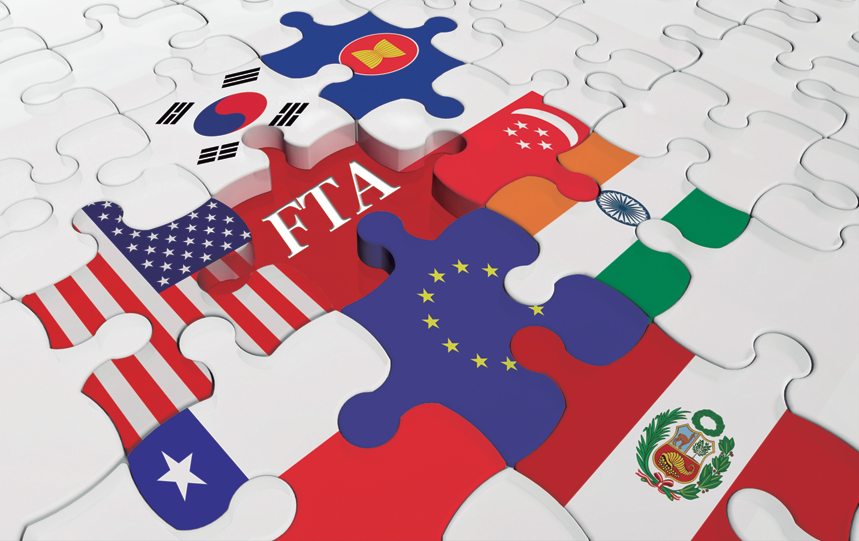 The new NDA government has recently announced its decision to review India’s existing free trade agreements (FTAs). “I have instructed the ministry to do a complete analysis of each of the FTAs, as not every FTA is seen completely beneficial to India… The ministry will come out with a report on it soon. It has to happen in a fortnight,” said Nirmala Sitharaman, Minister of state for Commerce and Industry on June 14, 2014. This decision apparently indicates the willingness of the new government to change the overall policy direction and thrust towards FTAs.

Since 2005, the previous UPA government was pushing for greater India’s engagement with FTAs despite several important leaders and ministers raised concern over the adverse impact of India-ASEAN FTA on domestic manufacturing, agriculture and trade balance. A Trade and Economic Relations Committee (TERC) was established by the then Prime Minister under his office as the top decision-making body on the FTAs.

The previous government negotiated the FTAs without any meaningful consultations with various stakeholders including the state governments. No efforts were made to inform Parliament and public at large about the broader objectives and contours of FTA policy. Except the TERC and trade negotiators, no one else had any clue about the India’s negotiating position and strategy. Even a basic document outlining key aims and objectives of government’s FTA policy was not available in the public domain.

What led to this decision? It appears that India’s deteriorating trade balance with FTA partners prompted this decision as imports are increasing by more than exports. Needless to add, the consistent campaigning by civil society groups (including the Forum on FTAs), farmers groups and Indian industry highlighting the potential costs associated with existing (and future) FTAs also contributed in awareness building among the political establishment over the past few years.

It is difficult to predict the outcome of the review. The review may have important bearings on the future FTAs especially the India-EU FTA. The negotiations on the highly ambitious India-EU FTA are supposed to resume in the next few weeks.

However, the government should recognize that a comprehensive cost-benefit analysis of more than 20 FTAs cannot be carried out within a fortnight. Besides, the review process should be opened up by inviting inputs and comments from trade experts, farmers’ groups, industry and civil society groups. Once the review has been completed, it should be posted on Ministry’s website for public access. Now more than two weeks have passed, the findings of the review have yet to be made public.

Post-review, the government should delineate its broader policy approach towards bilateral and regional trade agreements. All negotiations on future FTAs should be carried out in tandem with, or as part of, the overall FTA policy framework. This becomes all the more important as nowadays FTAs incorporate rules on cross-border investments, intellectual property rights, government procurement and competition policy.

The new government should soon decide on the fate of TERC constituted by the previous government. Whether it should be reconstituted or abolished all together?

In a democratic polity, all FTAs and other international agreements should be ratified by the Parliament. In a statement issued on April 10, 2013, BJP leader Murli Manohar Joshi had demanded that “all treaties which impinge upon the sovereignty of the country and the fundamental rights of the people including food security and health, and the federal structure of the country should be ratified after the scrutiny of the Parliament.”

Even countries (such as Dominica Republic) ruled by dictators for decades have such ratification provisions in their constitution. Why can’t India – the largest democracy in the world?