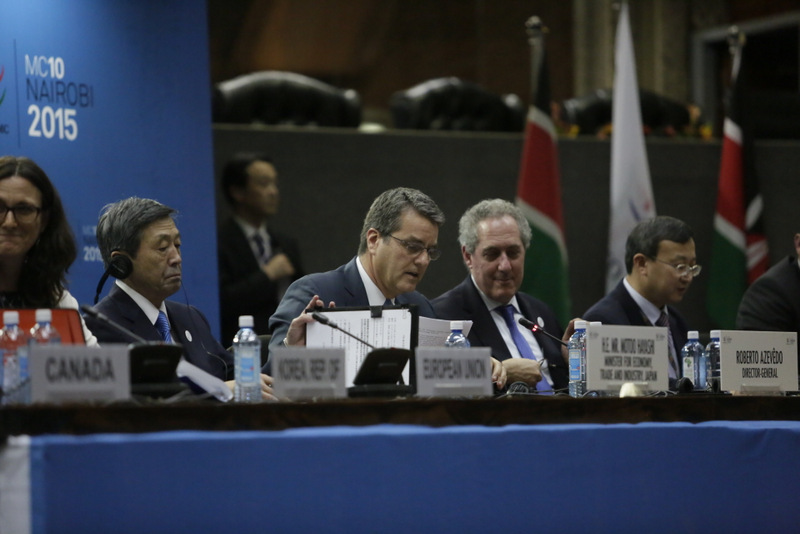 Very few among the ardent observers of the World Trade Organization (WTO) had held any hope that the 10th Ministerial Conference held recently in Nairobi would provide some direction to the seemingly rudderless organisation. The run-up to the Nairobi Ministerial was unlike any of the previous Ministerial Conferences as most of the members did not show much interest in drawing up an agenda for the members from the 162 members to discuss and take decisions. It was not very difficult to surmise why the developed countries wanted to walk away from the multilateral trading system that the WTO represents, for there were at least two related reasons.

The first was that the developments in the WTO, especially in the Doha Round negotiations, was forcing the big powers to share the economic pie with not just the emerging economies, but had also raised the spectre of bringing the new aspirants, the so-called Next Eleven and others.

The DDA was put forward as an agenda to re-work several of the key agreements keeping in view the development concerns of the developing countries.

Negotiations in the Doha Round that were conducted under the rubric of the Doha Development Agenda (DDA) challenged the carefully crafted framework of rules that the major economic powers had put together in the covered agreements under the WTO. The DDA, which was launched after the Doha Ministerial Conference in 2001, was put forward as an agenda to re-work several of the key agreements keeping in view the development concerns of the developing countries. Thus, the agriculture negotiations were mandated to include in the WTO’s Agreement on Agriculture (AoA) instruments that would take cognisance of the food security and rural livelihood interests of developing countries, while at the same time, curb the use of trade-distorting subsidies. The latter mandate was focused on a politically inconvenient issue for the developed countries, especially the United States and to a lesser extent, the European Union members.

The Doha Ministerial Conference also saw the WTO members introduce measures to blunt the market power of the large firms in the pharmaceutical industry that they exercised using their patent monopolies. And, finally, India and other developing countries argued for freer mobility of labour in global services trade, and to therefore provide an opportunity to their workforce to benefit from trade.

In sharp contrast, the TPP, along with TTIP, has set the stage for the developed countries to do all the talking about trade rules. The emphasis in these agreements is on opening markets without paying any attention to removing the distortions in the markets caused by subsidies and other export incentives. This implies, for instance, that the bane of agricultural subsidies granted by the United States and the European Union that has distorted the global commodity markets and has hurt small farmers in developing countries can continue unchecked. The DDA was given the mandate to critically look at the farm subsidies given by the United States, which had increased from $61 billion in 1995 to $ 140 billion in 2012 and is threatening to increase further after the 2014 Farm Bill, but with the coming of the new trade arrangements like the TPP, the United States’ subsidies regime would remain unchallenged, paving the way for consolidation of the large traders in commodity markets worldwide.

At the same time, the TPP has put the clock back on making the patents and other intellectual property laws to strike a better balance between the interests of the monopoly rights of the owners of intellectual property and the users of the proprietary products. The TPP has proposed to swing the balance in favour of the former, which raises the spectre of increasing the prices of proprietary products, whose immediate impact would be felt in the area of healthcare products, especially of medicines. In recent years, there has been a spate of cases of unfair use of monopoly rights by the pharmaceutical firms, which has left the authorities even in the United States in a quandary.

Ironically, it is the developed world that is now using this lack of progress in the DDA as the reason for abandoning it altogether.

In the face of such perverse tendencies that are being promoted the TPP, the reluctance of the developing countries to counter them remains the biggest unanswered question. Through the deliberations on the DDA, they had given themselves a firm platform to put in place trade rules that provided the opportunities to the lesser players in the global markets to take advantage of trade liberalisation. It was, of course, expected that the dominant interests would resist such a move, which they did quite successfully by stalling any forward movement on the DDA. Ironically, it is the developed world that is now using this lack of progress in the DDA as the reason for abandoning it altogether.

Since the conclusion of the Nairobi Ministerial, there have been assessments aplenty as to what was gained and lost through the decisions that the Ministers have inked. If the collective interest of developing countries, as Commerce Minister Nirmala Sitharaman put it was to “continue to work on all pillars [of the DDA], keeping its development dimension intact”, they should feel hard done-by, as the Ministerial Conference was not unanimous over its backing for the DDA. Since the WTO work programme is decided through consensus, the future of DDA does seem to be in jeopardy.

In this context, the comment of the United States Trade Representative (USTR), Michael Forman, that the WTO members “have been freed to consider new approaches to pressing unresolved issues” assumes significance. This statement implies that select groups of countries would work for advancing of the trade liberalisation agenda in select areas, without involving the larger membership of the WTO.

Since the WTO work programme is decided through consensus, the future of DDA does seem to be in jeopardy.

This so-called “plurilateral approach” is currently been followed informally by countries (the second phase of liberalisation of trade in information technology products, or ITA-II, is one such example), but USTR’s comments indicate are that this approach could be mainstreamed. Such a development would surely deal a terminal blow to multilateralism, which is expected to be the spirit of the WTO. It is therefore paradigm that has argued that trade rules must meet the larger objective of development, which faces an existential threat. The challenge for India and the other developing countries is to face up to this challenge.