Trump’s Steel and Aluminium Tariffs: What are the Bigger Risks? 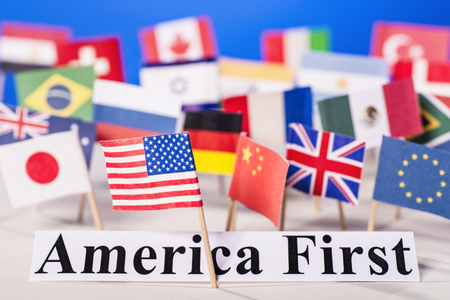 US President Donald Trump has finally taken the steps that he was threatening to right from his campaign days, namely, to block imports to trigger revival of the American manufacturing sector. He implemented the extra-ordinary decision to impose import tariffs of 25% and 10% on steel and aluminium, by invoking the provisions of Section 232 of the Trade Expansion Act of 1962. This provision allows the Administration to take measures to protect domestic industries for “national defense” and “national security”.

President Trump’s action was backed by an investigation conducted by the Bureau of Industry and Security of the US Department of Commerce, the report of which was released last month. This investigation had made a strong case for the imposition of import tariffs on the two metals for national security, based on the understanding that “national security can be interpreted more broadly to include the general security and welfare of certain industries, beyond those necessary to satisfy national defense requirements that are critical to the minimum operations of the economy and government.” This interpretation lends itself easily to bringing substantially more products under the dragnet of import tariffs. Equally egregious is President Trump’s insistence that the tariff increases on steel and aluminium are for an “unlimited period”.

There are at least three critical dimensions arising from the actions taken by the Trump Administration, which need to be considered. The first is that the actions on steel and aluminium imports are part of a pattern of trade protectionism being practised by the Administration. The second concerns the response of several major trading nations who have already retaliated or are threatening to retaliate against US imports, thus raising the grim prospects of a trade war, reminiscent of the 1930s. The third is that the unilateral action taken by the US poses a serious challenge to the framework of global trade rules governed by the World Trade Organization, the implications of which can be far reaching.

While the discussions on President Trump’s action have been riveting around steel and aluminium, the problems caused by US trade protectionism run much deeper for two reasons. One, there has been excessive use of anti-dumping measures on steel and the two, there are two other products, namely  washing machines and solar cells and modules, whose imports have been restricted by the United States President in the recent months.

Until the middle of last month, the US had passed 169 antidumping and countervailing duty orders only on steel, of which 20 are against India and there are 7 more ongoing investigations. As a result of such extensive use of anti-dumping actions, India and the other major exporters face considerable uncertainties in the world’s largest export market for steel.

At the beginning of the year, President Trump authorised imposition of restrictions on the imports of washing machines and solar cells and modules using the provisions of Section 201 of the Trade Act of 1974, the first time such authorisations have been made in the past 16 years. Section 201, which is the analog of the “Safeguard Measures” under the WTO, allows, as a temporary measure, to raise import duties or imposing nontariff barriers on goods entering the United States that injure or threaten to injure domestic industries producing similar goods. In case of washing machines, import quotas have been established for 3 years, wherein, in the first year, 20% tariffs would be imposed on imports of up to 1.2 million washing machines and 50% tariffs would be imposed on imports beyond the above threshold. The safeguard measures in case of solar cells and modules would last for 4 years, with 30% tariffs being imposed in the first year.

For the past few weeks, the US President has been suggesting that he would push for the imposition of “reciprocal tax” against countries using tariffs on American products. Although the President has not clarified as to how his proposed “reciprocal tax” would be designed or implemented, this proposal is bound to draw ominous parallels with the infamous Smoot-Hawley Tariff Act of 1930 (better known as the Smoot-Hawley Tariff Act, after its sponsors, Senator Reed Smoot and Representative Walter Hawley). The objectives of the Smoot-Hawley Tariff Act were almost identical to those laid out by President Trump, namely, to protect jobs in American industry and agriculture by shielding the domestic industries from import competition, using tariffs on a large number of products. In the wake of the Smoot-Hawley Tariff, trade partners of the US imposed retaliatory tariffs, restricting access to American products in their markets. Many analysts have argued the trade wars were responsible for deepening the economic crisis arising from the stock market crash in 1929 and causing the Great Depression of the 1930s.

Within a week of President Trump’s announcement the use of trade protectionism, it has become clear that steps in this direction would not only sow the seeds of uncertainty in the global economy at a critical juncture, but have, more importantly, it would trigger the unsavoury prospects of a trade war, reminiscent of the 1930s.

Since the beginning of the year, there are strong indications that the global economy was finally shrugging away the ghosts of the 2008 recession. Further, the WTO has reported that global trade would expand by just less than 4% in 2018. This positive turnaround could do well without the shocks that have now been imparted to it by US trade protectionism.

Since the Administration’s announcement of tariff hikes on steel and aluminium, its major trade partners, in particular the EU and Canada, have been threatening to retaliate by targeting American icons like Harley-Davidson, Kentucky bourbon and Levi’s blue jeans. The first salvo has already been fired – EU trade commissioner, Cecilia Malmstrom has announced concrete plans to retaliate against the proposed US tariffs. These include imposition of higher import duties on bourbon, peanut butter, cranberries, orange juice, steel, and industrial products. The implications of the ill-thought-out plans of the Trump Administration on its trade with its partners are getting increasingly clear.

Another parallel harking back to the beginning of the 1930s is the exercise of American unilateralism for protecting the domestic entities. Nine decades earlier, President Herbert Hoover had authorised imposition import tariffs unilaterally since global trade rules were non-existent. The Trump Administration is treading the same path, but it is pursuing unilateralism by completely disregarding the disciplines of the World Trade Organization (WTO). This disregard for the WTO rules is not something that is new for the Trump Administration. Over the past year, it has de facto rejected the multilateral trading system through a systematic process of non-engagement. By initiating this latest move of tariff wars, the Administration is challenging the very existence of the post-war rules-based multilateralism, which, despite its limitations, has made efforts to bring order in the way sovereign states engage in trade.