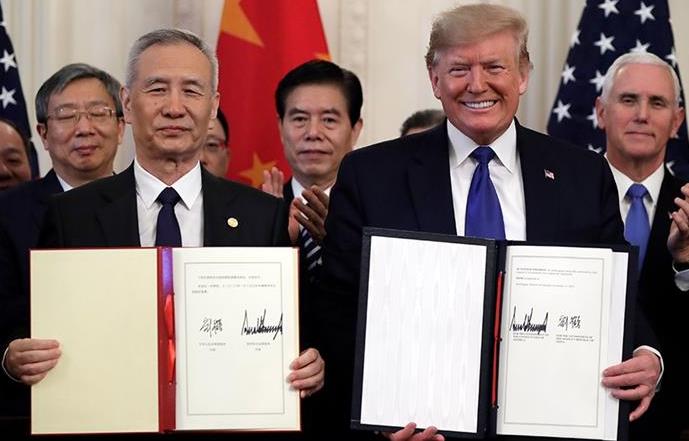 In his opening remarks at the signing ceremony held at the East Room of the White House, President Trump stated: “Today, we take a momentous step – one that has never been taken before with China – toward a future of fair and reciprocal trade, as we sign phase one of the historic trade deal between the United States and China. Together, we are righting the wrongs of the past and delivering a future of economic justice and security for American workers, farmers, and families.”

The Chinese leader Xi Jinping also welcomed the deal and described it as “good for China, the US and the whole world.”

President Trump is selling this deal as a “historic” and would use it to boost his re-election bid later this year. Trump hopes that this agreement will shore up his political base ahead of the 2020 elections as rural America (a large segment of his base) was severely hit by retaliatory tariffs imposed by China on soybeans and other agricultural products.

On the other hand, the deal brings welcome relief to China. It gives breathing space to Xi Jinping to deal with the daunting economic slowdown as well as Hong Kong protests. In 2019, China’s economy grew 6.1 percent — the lowest since 1990. One big challenge for China is to contain financial risks that are fast accumulating in its financial system while maintaining high-quality growth. The trade deal gives the Chinese government some space to redouble on its efforts to address current economic challenges.

The “phase one” agreement is not a free trade agreement by any means. Nor will it end the trade war between the US and China. Despite the agreement, both trading partners have decided to maintain the bulk of the tariffs that were imposed on each other’s products during the trade war. The agreement keeps in place $370 bn in tariffs on Chinese imports as well as Beijing’s retaliatory tariffs.

Of course, a lot would depend on the actual implementation of the agreement that will take some time, given the lack of mutual trust and intense geopolitical rivalry between the two giants.

The “phase one” trade deal lacks much substance and leaves too many questions unanswered. It may be too early to make a final assessment of the 94-page agreement, but a cursory examination indicates that China has made no significant concessions to the US that would represent a “historic” deal for the Trump administration.

The deal is limited in scope as it proposes modest changes in the areas of intellectual property, technology transfer, and market access to the Chinese financial sector. Further, most commitments outlined in the agreement have already been made by China unilaterally or at international forums such as G20 and WTO. For instance, the deal requires China to fully comply with its WTO agriculture commitments and rulings on agriculture subsidies and quotas. China has already decided not to appeal the WTO panel’s decisions and agreed to abide by the rulings.

Broadly speaking, the deal is a repackaging of previously announced commitments by China to open up its domestic markets and in line with its move towards establishing a more market-based economy. In fact, the Chinese authorities view several concessions in the areas of intellectual property, financial services, and currency management as beneficial to the country’s economic development and its expanded presence in the global economy. Some analysts point out that far from bringing the Chinese to their knees, China could end up being a bigger surprise winner of the deal in the long-term.

The “phase one” trade deal falls far short of drastic policy changes and wide-ranging deep reforms sought by the Trump administration when it launched a trade war with China in 2018. For instance, the deal does not address issues such as dismantling of industrial subsidies and the reduced role of state-owned companies in the Chinese economy. Nor does it address cybersecurity issues what the US characterized as “Chinese government-conducted, sponsored and tolerated cyber theft” – a thorny issue that ostensibly triggered the trade war. After months of negotiations and imposition of tariffs on billions of dollars worth of Chinese imports, the US has not achieved several of its stated objectives.

Below is a brief analysis of some of the key elements of the “phase one” trade agreement.

The Intellectual Property (IP) chapter covers several issues, including trade secrets, pharmaceutical-related intellectual property, patents, geographical indications, trademarks, and enforcement against pirated and counterfeit goods. The agreement proposes no substantive changes in China’s current IP regime except that China has agreed to establish a mechanism for the early resolution of drug-related patent disputes and to provide patent term extensions to compensate for unreasonable delays in the patent office or drug approval processes.

On its own, China was going to implement some of the commitments made under the IP chapter, but the trade war with the US delayed the process.

The agreement states: “Within 30 working days after the date of entry into force of this Agreement, China will promulgate an Action Plan to strengthen intellectual property protection.” Any observer of China’s IP regime would attest that over the past two decades, China has steadily strengthened the protection of IPRs in pursuit of its self-interest as well as to meet its international commitments under the WTO Agreement on Trade-Related Aspects of Intellectual Property Rights (TRIPS). Not only China has promulgated strict IPR laws in the last two years, but it has also strengthened the enforcement processes as the country is climbing up the technological ladder.

It is worth remembering that China wants to develop as a hub for high-tech manufacturing and advanced R&D. China sees its future in the innovation-led economy and creating new high-value-added products and services, supported by a strict IPR regime. That’s why China has been moving its IPR regime closer to other developed countries.

The Technology Transfer chapter deals with obligations to ban forced technology transfers in China. Although Beijing has denied carryout out such practices, the US and many developed countries often accuse China of putting pressure on foreign firms to transfer their technology to domestic firms as a condition for obtaining market access or administrative approvals.

Much before this deal, China had already undertaken legal measures to ban forced technology transfers. In March 2019, China adopted a Foreign Investment Law (FIL) that replaces three existing laws governing foreign direct investment in the country. The unified FIL explicitly bans the forced transfer of technologies through administrative means. Came in effect from January 1, 2020, the FIL stipulates: “The conditions for technology cooperation shall be determined by all investment parties upon equal negotiations under the principle of fairness and no administrative department or its staff shall force any transfer of technology by administrative means.”

Further, the FIL also imposes penalties on Chinese officials if they force foreign firms to transfer their technology to domestic entities.

Perhaps the biggest surprise of the “phase one” agreement is China’s commitment to buy an additional $200 bn worth of US goods and services over a two-year period (January 2020-December 2021). It includes $77.7 bn of manufactured goods, $32 bn of agricultural products, $52.4 bn of energy, and $37.9 bn of services.

Even though this commitment is meant only for two years, it raises four key concerns. First, the numbers are highly ambitious, especially for agricultural products, and one wonders whether the US exporters can deliver without diverting exports from other countries.

Second, many of these US exports will still be subject to retaliatory tariffs imposed by China during the trade war and therefore, will be relatively more expensive.

Third, can China force its privately-owned domestic firms to buy products from the US instead of from other trading partners with whom it has signed free trade agreements?

Fourth, aren’t such managed trade practices a violation of the WTO rules?

Another core element of the trade agreement is the commitments made by China to open up its financial services sector to the US banks, insurance companies, asset management companies, credit rating agencies, and credit card companies and thereby allowing US financial institutions to establish wholly-owned entities in the country.

Following are some of the major commitments made by China with specific timelines under the agreement:

* “China shall allow U.S. financial services suppliers to apply for asset management company licenses that would permit them to acquire non-performing loans directly from Chinese banks, beginning with provincial licenses. When additional national licenses are granted, China shall treat U.S. financial services suppliers on a non-discriminatory basis with Chinese suppliers, including with respect to the granting of such licenses.”

* “No later than April 1, 2020, China shall remove the foreign equity cap in the life, pension, and health insurance sectors and allow wholly U.S.-owned insurance companies to participate in these sectors.”

* “No later than April 1, 2020, China shall eliminate foreign equity limits and allow wholly U.S.-owned services suppliers to participate in the securities, fund management, and futures sectors.”

* “China shall allow U.S. financial services suppliers to apply for asset management company licenses that would permit them to acquire non-performing loans directly from Chinese banks, beginning with provincial licenses.”

Although the Chinese authorities had already announced some of these commitments in 2019, the “phase one” trade agreement has brought forward the planned opening of the Chinese financial services sector from December 2020 to April 2020 for the US-based financial firms.

Unlike most other chapters, the agreement calls for a two-way opening of the financial service sector. In return, the US has also agreed to rapidly process applications by Chinese banks, insurance firms, and securities firms to enter and operate in the US markets.

However, there is a much broader policy issue involved here as financial liberalization can pose risks to financial system stability in China. The Chinese government’s intention to further open up the financial sector is to spur more innovation and greater competition, but a more cautious approach is warranted as financial risks are building up in China’s financial system. China’s non-financial corporate debt, government debt, non-performing loans, and opaque shadow banking sector pose potential risks to financial stability. The recent bailouts of three regional banks have exposed the vulnerabilities in the Chinese banking sector.

The “phase one” trade agreement contains a two-page chapter on macroeconomic policies and exchange rate matters. This chapter includes several provisions reaffirming both countries existing G20 and IMF commitments to refrain from competitive devaluations and to avoid manipulating exchange rates.

In addition, the US and China countries have agreed to publicly disclose data on foreign exchange reserves and external balances. Nothing newsworthy as both countries regularly put such data in the public domain. The chapter also contains an enforcement mechanism if any country fails to adhere to the commitments on exchange rate policies or transparency.

By and large, the currency management provisions of the US-China deal are less substantive than the new United States-Mexico-Canada Agreement (USMCA). For instance, the USMCA requires member-countries to regularly disclose the monthly interventions in both the spot and forward foreign exchange markets. And in no way, the “phase one” deal resembles the 1985 Plaza Accord that radically weakened the US dollar and strengthened the Japanese yen.

To conclude, the “phase one” trade agreement between the US and China signals a pause in the ongoing trade war but not much more.