The Greeks Have Spoken: What Happens Next? 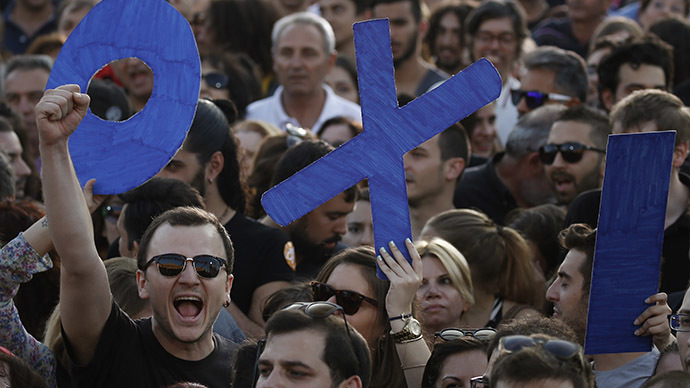 The Greek citizens have delivered a resounding ‘No’ to bailout conditions demanded by creditors in a referendum held on 5th July. The referendum was announced by Greece’s Prime Minister, Alexis Tsipras, on 27th June after bailout talks with the creditors failed. The referendum asked voters to decide “whether to accept the outline of the agreement submitted by the European Union, the European Central Bank and the International Monetary Fund at the Eurogroup of 25/06/15.”

The government-backed ‘No’ side won with 61.31 percent of votes, while ‘Yes’ got the remaining 38.69 percent. Further, not a single electoral district of Greece voted for ‘Yes’. No one in Greece had predicted such a massive victory for ‘No’ vote. Most opinion polls had predicted a tight contest with ‘No’ side winning by a slim margin.

The Broader Meanings of ‘No’ Vote

Does a ‘No’ victory mean Greece leaving the euro and the EU? Not exactly. The referendum was conducted on the bailout agreement with the creditors rather than on Greece’s membership in the Eurozone or the EU. As pointed out by Mr. Tsipras, “This is not a mandate of rupture with Europe, but a mandate that bolsters our negotiating strength to achieve a viable deal.”

Undoubtedly, the landslide victory in the referendum has greatly strengthened the bargaining power of the current government with creditors. “This time, the debt will be on the negotiating table,” claimed Mr. Tsipras. The debt relief has remained one of the key contentious issues between Athens and Brussels. In the last six months, proposals put forward by the current Greek government seeking debt relief (consisting of debt write-off and extension of maturities) were not accepted by the European creditors, especially Germany. It’s too early to judge whether Germany and other European creditors will consider debt relief after Sunday’s referendum.

The impacts of the austerity measures imposed by the international creditors have been catastrophic. The Syriza-led government, which came into power on an anti-austerity platform in January 2015, has resisted pressure to implement harsh austerity programs that affect the elderly and the poor.

Another positive outcome of the referendum is that the opposition parties have also given support to the Syriza-led government to negotiate a new deal with creditors. In many important ways, the decisive referendum has brought political stability in Greece which has witnessed four elections in five years.

Now the ball is in the court of the Greek government to extract a better deal with substantial debt relief and less punishing austerity measures.

The referendum results have certainly brought disappointment to many European leaders who have been demanding harsh austerity measures in exchange for bailout funds. In the words of Jeroen Dijsselbloem, Dutch Finance Minister and chair of Eurozone group of finance ministers, “This [referendum] result is very regrettable for the future of Greece. For recovery of the Greek economy, difficult measures and reforms are inevitable.”

Within hours after the results of referendum were announced, the Greek Finance Minister, Yanis Varoufakis, announced his sudden resignation hinting at pressure exerted by European leaders against his presence in the negotiations. It is no secret that the EU leaders were highly critical of Varoufakis representing Greece at Eurogroup meetings and some even sought his removal from the negotiating team.

Announcing his resignation in a blog, Varoufakis stated:

“Soon after the announcement of the referendum results, I was made aware of a certain preference by some Eurogroup participants, and assorted ‘partners’, for my… ‘absence’ from its meetings; an idea that the Prime Minister judged to be potentially helpful to him in reaching an agreement. For this reason I am leaving the Ministry of Finance today. And I shall wear the creditors’ loathing with pride.”

The government has appointed Euclid Tsakalotos as the new finance minister who would lead negotiations with the international creditors.

A New Deal for Greece

In the current circumstances, a new deal is challenging but still feasible. Both sides need to realize the sense of urgency to pursue a realistic agenda. The negotiations between Athens and Brussels should resume immediately in order to avoid a major financial meltdown.

As the previous package has been firmly rejected by the citizens, the Greek government should put forward a new rescue package consisting of substantial debt relief and less austerity. A new framework agreement with creditors could be worked out immediately as the detailed action plan could take weeks or months to reach an agreement.

On their part, the leaders of Eurozone should accept a compromised deal to end the impasse. They should not insist that any special privileges to Greece would encourage other potential rule-breaking eurozone countries. The outcome of several meetings planned by Eurozone finance ministers and political leaders this week will provide the roadmap of future negotiations with Greece. As discussed in greater detail elsewhere by this author, the costs of a Grexit are high not only for Greece but also the entire Europe in terms of wider economic and geo-political implications.

In the next few days, an agreement on the refinancing of Greece’s fragile banking system is badly needed. The European Central Bank (ECB) should take lead to provide liquidity support to the Greek banks, without which they could collapse. In two-weeks’ time, Greece will have to repay €3.5bn on July 20 on a bond held by the ECB. In the absence of any liquidity support from ECB, Greece may be forced to print its own currency to support its banks and economy, thereby paving the way for a Grexit. Last week, Greece defaulted on a €1.5bn repayment to the IMF and therefore cannot receive new money until the country clears all arrears to the Fund in full.

It is important to note that the IMF in its preliminary draft debt sustainability analysis (dated June 26, 2015) has sought substantial debt reduction along with extended concessional financing for Greece.  This IMF analysis specifically points out that Greece needs “a significant haircut of debt, for instance, full write-off of the stock outstanding in the GLF facility (€53.1 billion) or any other similar operation.” The Greek Loan Facility (GLF) consists of bilateral loans pooled by the European Commission.

It remains to be seen whether the IMF Board will support substantial debt write-off for Greece (as mentioned in the analysis). If the IMF takes a more sympathetic view of Greece’s debt burden in the official negotiations, it could encourage Eurozone leaders to enter into debt relief discussions.

There are two possible scenarios that stand out, at this critical juncture. First, a new deal is feasible if the European leaders realize the true importance of ‘No’ vote. The message of Greek referendum is loud and clear: harsh austerity measures imposed by the EU lack democratic legitimacy. And the debt relief should not be treated as a taboo.

Hence, keeping the wider interests of the European project in mind, its political leadership should adopt a more flexible approach towards Greece based on the principles of democracy, human rights, cooperation and solidarity. After all, the financial rules are meant to serve the people, not the other way around.

In return, Greece should also undertake policy measures to check massive tax evasion by oligarchs and streamline its public finances. Needless to say, the Greek government should be given a fair chance to put its house in order. This entails patience on the part of official creditors.

The second scenario revolves around a Grexit. There is no denying that the prolonged stalemate may lead to more defaults in the coming weeks, thereby increasing the chances of a Greece exit from the Eurozone which would have grave consequences for both sides.