On the Brink of Collapse: Decoding a UN-Backed Climate ETF 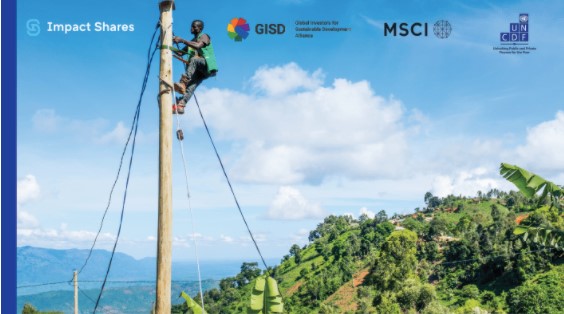 The news that a newly launched UN-backed climate exchange-traded fund is on the verge of closing due to insufficient capital has disappointed many who expected such financial market instruments to mobilize new sources of private capital in alignment with sustainable development and bridge the financing gap for the UN’s 2030 Agenda and Sustainable Development Goals (SDGs).

Launched with much fanfare at the UN Climate Change Conference (COP 26) on November 3, 2021, the Impact Shares MSCI Global Climate Select ETF (NYSE Arca: NTZO) could close next month if it fails to attract additional investment. Despite significant pledges from banks and financial institutions at the launch, NTZO has only raised $1.8 million to date. Incomprehensibly, the individuals in charge of managing this ETF have invested more than 80 percent of the fund’s $1.8 million.

On the other hand, members of the UN’s Global Investors for Sustainable Development (GISD) Alliance that co-created NTZO are refusing to invest until other investors do the same. Thirty members of the GISD wield tremendous financial clout, collectively controlling $16 trillion in assets. Suppose each member of GISD had contributed $5 million to NTZO as seed money. The $150 million would have attracted additional financial commitments from the financial players, enabling it to raise a respectable amount of money for further investments.

While one can understand the members’ concerns about NTZO’s investment limits, the fact that they are delaying the provision of seed capital until others do so is unacceptable. This episode reflects poorly on the GISD Alliance’s collective leadership.

What is an Exchange-Traded Fund?

In simple terms, an exchange-traded fund (ETF) is an open-ended fund that trades on a stock exchange like a common stock. An ETF is a basket of investments such as stocks, bonds, commodities, or currencies. Many ETFs passively track an underlying stock index, such as the Nifty 50 or the S&P 500. For example, an ETF tracking the Nifty 50 tracks the index’s underlying stock portfolio by investing in the index’s constituents in the same proportion as the index. Therefore, an ETF’s portfolio is exactly similar to the underlying assets.

Amundi, Europe’s largest asset management company, introduced low-carbon indices in 2014 and launched one of the first Paris Aligned Benchmark ETFs in 2020. Climate-related ETFs are a subset of funds that consider environmental, social, and corporate governance factors. Within the environmental space, the fastest-growing segment belongs to climate-related ETFs.

Interest in climate-related investments has grown as environmental awareness has become more widespread. As a result, investor demand for climate-related ETFs has increased dramatically. Many retail investors believe that by investing in climate ETFs, they can positively impact the environment while making a profit. It promises feel-good outcomes without sacrificing financial returns. Of late, investors are scrutinizing climate impact as closely as they do financial returns, owing to the widespread prevalence of portfolio greenwashing in this segment.

The NTZO ETF is based on the MSCI ACWI Climate Pathway Select Index, which includes companies associated with the transition to a lower-carbon economy. Licensed by MSCI, the index aims to maximize its exposure to companies that commit to emission reduction targets and achieve annual CO2 reduction targets of 7 percent.

The index excludes companies that do not adhere to the UN Global Compact principles and those that profit from guns, alcohol, and tobacco, or are involved in ESG or environmental controversies.

Microsoft, Apple, Alphabet, and Schneider Electric are among the index’s top ten constituents. Almost 99 percent of the fund’s assets are invested in developed countries, with 65 percent in the United States alone.

NTZO was unlike any other climate ETF on the market. It was an unusual collaboration between Impact Shares (a non-profit fund manager), Morgan Stanley Capital International (an investment research firm), and the UN Capital Development Fund (UNCDF). As part of the arrangement, Impact Shares will manage the NTZO and will donate the net management fee for this ETF to the UNCDF, which operates in the world’s 46 least developed countries.

Impact Shares and the GISD Alliance jointly developed NTZO. The GISD Alliance is an initiative of the UN Secretary-General, launched in October 2019 and composed of the CEOs of 30 of the world’s largest banks and corporations, including Allianz, Bank of America, Citigroup, PIMCO, Santander, and UBS. The GISD Alliance was formed to facilitate the scaling up of long-term finance required to achieve the SDGs. Alongside the NTZO ETF, the Alliance has also launched an SDG Investor Platform to facilitate large private sector investments in the SDGs. The GISD Alliance claims to work closely with several high-level international policy forums, including the Financial Stability Board, the G20 Sustainable Finance Working Group, the G7, and the COP.

The three-way partnership has been touted as a win-win-win option for all parties. The NTZO ETF has been aggressively marketed as an innovative financial instrument capable of mobilizing private finance to implement SDG 13 (Climate Action). In addition, it has been publicized as contributing to SDG 17 (Partnerships for the Goals) due to the close collaboration between Impact Shares, MSCI, and UNCDF. “NTZO demonstrates UNCDF’s ability to create innovative financial products that appeal to investors and continue to raise impact standards. And the fee donation will help the UN build climate resilience in the world’s LDCs,” said Preeti Sinha, Executive Secretary of UNCDF.

NTZO is UNCDF’s second ETF in partnership with Impact Shares, following the launch in 2018 of the Sustainable Development Goals Global Equity ETF (NYSE Arca: SDGA), which tracks an index of global equities ranked by societal development and environmental, social, and governance (ESG) metrics. It is equally incomprehensible that the GISD members have not made significant investments in SDGA. As of February 22, 2022, the SDGA had just $5.7 million in assets under management. As a result, the SDGA ETF did not perform as well as expected.

The NTZO and SDGA ETF experiences demonstrate the limitations of relying on such financial market instruments (no matter how innovative or sophisticated) to mobilize private capital in alignment with the SDGs. Using only market-based solutions to address the market failure aspect of climate change may not be the best course of action.

Forget about raising tens of billions of dollars via such financial instruments; even millions of dollars are not forthcoming, despite lofty promises and pledges by GISD members. What use are financial commitments if the members are not willing to deliver? Isn’t this another example of a PR campaign that relies heavily on words but little action?

When evaluating the impact of climate ETFs, a bigger question arises: given the inherent limitations of ETFs, are there not more effective financial instruments to channel funds into climate-friendly projects and programs around the world?

This is because climate ETFs (and ETFs in general) track benchmarks and are essentially passive instruments that do not allow fund managers to intervene in the operations of companies whose stocks are included in the index. Because they do not own the underlying stocks, ETFs do not have voting rights as individual or institutional shareholders.

While it is debatable whether shareholder activism works but such campaigns, at least, offer opportunities to influence company policies and practices in addition to raising important issues publicly. Hence, active management and engagement are more effective at accelerating a company’s efforts to achieve net-zero emissions.

Second, why can’t we bypass the financial markets entirely and funnel funds directly to enterprises and start-ups dedicated to achieving the SDGs? This can be accomplished through a variety of mechanisms, including loans or investments from development finance institutions and venture capital funds.

Fourth, an increasing number of research studies have raised concerns that the fund industry’s current climate investing practices may not be delivering desired outcomes due to the mounting threat of portfolio greenwashing. A recent study published by the EDHEC Business School found that market capitalization is the primary factor determining portfolio weights, accounting for up to 88 percent of the weights. While climate considerations play second fiddle at best. “To favour the fight against portfolio greenwashing, we suggest that when climate considerations represent less than 50 percent of the determinants of the weight of the stocks in a portfolio that is presented as promoting the transition to a low carbon or net-zero economy, then this portfolio should be considered to be at a significant risk of greenwashing and should not be permitted to claim that it is climate-friendly or aligned with net-zero ambitions,” says the study.

Finally, too much emphasis on climate ETFs and similar financial market instruments can obscure the critical role of environmental regulations, Pigouvian taxes, and international cooperation in combating climate change and maximizing social welfare. Climate ETFs cannot and should not substitute for policy and regulatory measures.