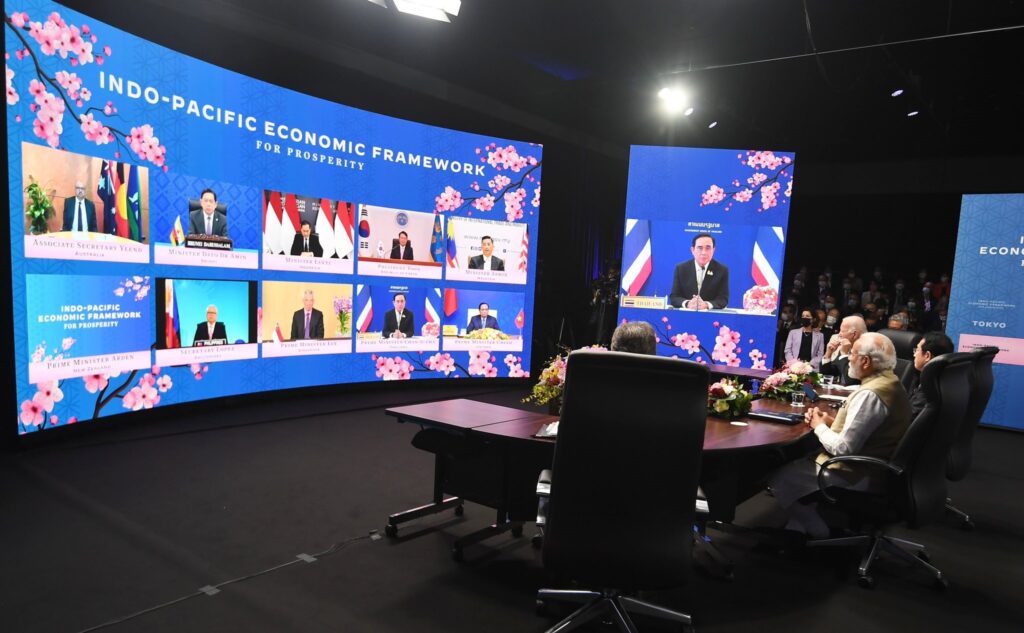 On May 23, the Joe Biden administration took a significant step to turn the clock back to the Obama Presidency by launching its own version of a “pivot to Asia” through the establishment of the Indo-Pacific Economic Framework for Prosperity (IPEF) with other partner countries — Australia, Brunei, India, Indonesia, Japan, the Republic of Korea, Malaysia, New Zealand, the Philippines, Singapore, Thailand, and Vietnam. Within days of its launch, IPEF expanded its membership to the Pacific Island states, with Fiji joining the initiative.

An American initiative to bring together its allies in the Indo-Pacific region to enhance economic cooperation is bound to lead to comparisons with one of former U.S. President Barack Obama’s pet projects, the Trans-Pacific Partnership (TPP), which was spiked by Donald Trump immediately after he took over the reins in Washington.

America’s withdrawal from the region also set the stage for China to strengthen its position in the region, for which it was enabled by the economic integration agreement of East Asia, the Regional Comprehensive Economic Partnership (RCEP). Although IPEF has not been formally projected as a bulwark against the Chinese hegemony, there are indications that the new coalition could focus on developing supply chains bypassing the world’s second-largest economy. But, more importantly, the IPEF reignites the twin ambitions of the U.S. to provide economic leadership and to challenge China’s hegemony in the region.

IPEF: A Framework Made in America

The U.S. Trade Administration had touted the TPP as “Made in America”, a tag that seems equally appropriate for the IPEF. At its launch, the IPEF was proposed as an elaborate framework of rules covering four pillars, namely, fair and resilient trade, supply chain resiliency, clean energy decarbonisation, and tax and anti-corruption. It is not clear whether the original signatories to the IPEF were fully in the know of the details that were unveiled at the launch of the initiative, for there is no record of any prior discussion. However, available evidence suggests that Washington has been carefully constructing the framework ever since President Biden had first spoken about it in October 2021 during the East Asia Summit, in the presence of all IPEF signatories except Fiji.

Following its usual process of coalescing the views of all major business interests and the political establishment, the Biden administration sought public comments in March from “interested parties” on the four pillars to assist its trade administration for developing the U.S.’s position in IPEF negotiations. Not surprisingly, major corporations, including Google, Microsoft, IBM, Intel, and Cargill, and influential industry associations such as the Biotechnology Innovation Organization and the Pharmaceutical Research and Manufacturers of America (PhRMA) responded to the call.

The IPEF was also discussed in considerable detail in the U.S. Congress, a process that is vitally important to secure bipartisan support for the Biden administration to conduct negotiations to translate the framework into reality. This is because the administration does not have the authority to engage in trade negotiations; the Trade Promotion Authority (TPA), which is it requires the U.S. Congress the administration to negotiate trade deals expired on July 1 last year. The TPA is a legislative procedure using which Congress defines the negotiating objectives of the U.S. and provides “a detailed oversight and consultation process for during trade negotiations”. The TPA gives the U.S. Congress the “authority to review and decide whether any proposed U.S. trade agreement will be implemented”.

The Biden administration has announced that under the “fair and resilient trade” pillar, it “aims to develop high-standard, worker-centred commitments” covering labour rights, the environment and climate, the digital economy, agriculture, transparency and good regulatory practices, competition policy, and trade facilitation. The clear focus of this agenda is to focus on issues that the U.S. considers vital to further its interests. One notable exclusion from this list is intellectual property rights (IPRs) which have generally been at the heart of the U.S.’ economic engagements with its partner countries. One possible reason for excluding IPRs could be the contentious nature of this issue. Monopoly rights granted by the IPRs have long been viewed as a major factor for the lack of adequate access to essential medicines at affordable prices.

Discussions on the ways to deal with IPRs have figured prominently in the wake of the COVID-pandemic, especially in the World Trade Organization (WTO), where 65 countries led by India and South Africa had called for a waiver from the implementation, application, and enforcement of several forms of IPRs during the pendency of the pandemic. Their argument was a waiver of the IPRs was necessary to ensure equitable access to vaccines and medicines. Support for the developing countries’ argument comes from the fact that until today, less than 18% of people in low-income countries have received at least one dose of the COVID-19. But IPRs could be included in the IPEF negotiations as several corporations, including those from the pharmaceutical and electronics sectors, and members of the Congress are making a strong pitch for their inclusion.

Promoting “fair and resilient trade” defines the U.S.’s agenda on trade, side-stepping its pursuit of the free trade ideal. The reason behind this shift could be that for most IPEF signatories, import tariffs are passé. Only four of the 14 signatories have average tariffs in double digits. The U.S. Secretary of Commerce, Gina M. Raimondo has, thus, affirmed that the IPEF is “intentionally designed not to be a same old… traditional trade agreement”.

The primary objective of the IPEF is to ensure a high degree of regulatory coherence and to make market access contingent upon realisation of regulatory standards. It must be pointed out that standards and regulations in most developed countries often create discretionary/discriminatory barriers to trade and overcoming these barriers is usually beyond the capacities, both institutional and otherwise, of lesser developed countries.

Two contentious issues that are generally included in free trade agreements (FTAs) involving the U.S., namely, labour rights and the environment and climate change, are duly included in the IPEF. The U.S. has for long favoured an effective linkage between strong worker’s rights and trade. Since 1988, the U.S. Congress has included worker rights as a principal trade negotiating objective of the country, but the U.S. trade administration has been exploring “the possible ways of dealing with worker rights issues in the [multilateral trade rules] so as to ensure that expanded trade benefits all workers in all countries”.

However, the inclusion of workers’ rights or “labour standards” using trade rules has been quite contentious and was rejected by the members of the WTO on several occasions. WTO members had arrived at a consensus that the “internationally recognized core labour standards” of the International Labour Organization (ILO) should be used to deal with issues pertaining to labour rights.

The WTO members had also rejected the use of labour standards for protectionist purposes and agreed that the “comparative advantage of countries, particularly low-wage developing countries, must in no way be put into question”. With WTO members refusing to include labour standards, the U.S. has been pursuing its agenda through its bilateral free trade agreements, beginning with the North American Free Trade Agreement (1994). Inclusion of labour standards in the IPEF is part of this American agenda.

As regards the environment, the United Nations Framework Convention on Climate Change (UNFCCC) had cautioned that “measures taken to combat climate change, including unilateral ones, should not constitute a means of arbitrary or unjustifiable discrimination or a disguised restriction on international trade”. The IPEF could threaten the abrogation of these decisions at the WTO and the UNFCCC.

The third set of issues, whose ramifications on the future of the digital economy and beyond can be far reaching, are those related to standards on cross-border data flows and data localisations. Control over data, the driver of the digital economy, will increasingly determine the dynamics of economies, and hence the issue of data portability assumes critical importance.

Although China was not mentioned at the official launch of the IPEF, possibly for diplomatic reasons, the second-largest economy has been at the centre of Washington’s strategies for the Indo-Pacific, especially with regard to supply chains.

However, the crux of the American narrative on this issue is the hope that U.S. manufacturing giants, most of which have made China their preferred production bases at least since the 1990s, would move to the other countries in the Indo-Pacific. But even if these corporations move to countries other than China, how can the U.S. ensure supply chain resilience?

What could India expect from the IPEF? While endorsing the IPEF, Prime Minister Narendra Modi had spoken of India’s aspiration to participate more substantially in the supply chains in the region. However, this would have its challenges, as would be clear from the likely implications of two issues included in the IPEF.

For instance, while addressing the needs of the digital economy, the U.S. has emphasised the importance of “high-standard rules… on cross-border data flows and data localization”. On this issue of data localisation, the Government of India has not yet taken a clear position. In 2019, its likely preference was revealed in the Draft National e-Commerce Policy, wherein it had backed restrictions on cross-border data flows. The key challenge for India is to sustain this diametrically opposite view to an uncompromising position of the U.S. on data localisation.

India should also be wary of the considerable emphasis that is being given to strengthening labour rights in the on-going discussions on the IPEF, both by corporate interests and members of Congress. In a Senate Finance Committee hearing in April, Elizabeth Warren, one of the more vocal voices among the Democrats extolled the United States Trade Representative, Katherine Tai, who would be leading the discussions on the “fair and resilient trade” for “incorporating strong, enforceable labor and environment standards to demonstrate [the U.S.s’] commitment to the importance of these areas in [the U.S.’s] competitiveness and in [its] terms of trade”. Moreover, Biden Administration’s trade policy speaks of “putting workers at the center” as one of its priorities.

While the U.S. has been following a cogent policy to further workers’ rights, the Indian Government’s policies in this regard have been quite ambivalent since the labour codes were unveiled. These codes are intended to introduce greater “flexibility” in labour markets, and it is still not clear as to whether the changes being introduced would be able to protect the interests of the workers.

Therefore, it seems evident that the Government of India would need considerable preparedness to engage fully in the IPEF processes.