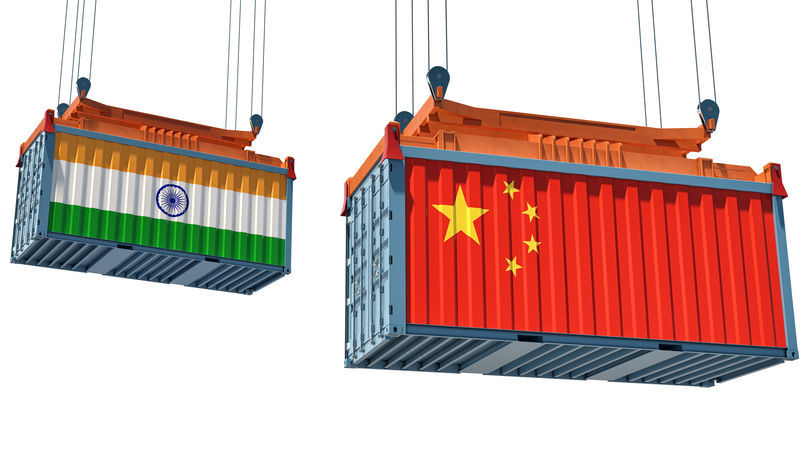 Since May 2020, India and China have had the worst face-off in decades on the line of actual control in India’s far North, which was yet another stark reminder that the two most populous nations have an extremely fragile relationship. But when the 20 Indian soldiers lost their lives in the ensuing clashes with China’s People’s Liberation Army, the fault lines of India’s economic relationship with its northern neighbour became wide open. Passions are justifiably running high in India, leading to the demands for boycotting Chinese products and investments that are becoming increasingly shrill.

Three issues arise that need to be considered in this context. First, how feasible or practical would be the step to boycott Chinese products altogether, given that India has developed a significant level of dependence on imports from its northern neighbour. The government of India finds itself in a bind, given the sheer dependence of the Indian economy on China. The second is to understand the circumstances leading to increased dependence, which did not happen in a hurry. It took China a good part of the past decade and a half to slowly but surely capture the Indian market in a very broad range of products. And, finally, can the Indian economy reduce its dependence on China, at least in the medium term?

Some Measures of India’s Dependence on China

China accounted for nearly 14 percent of India’s imports in the immediately preceding fiscal year, 2019-20 (April to March), and was by far its largest source for goods. The $65.3 billion of imports recorded in the year marks the second successive year when the value of Chinese imports has fallen, after peaking at $76.4 billion in 2017-18. Imports from China began expanding quite rapidly since 2003-04, as Figure 1 below shows.

It can be seen from Figure 1 that before 2003-04, India’s imports from China totalled just less than $3 billion, and its trade deficit vis-à-vis China was less than $1 billion. In the next five years, India’s imports from China increased to $32.3 billion, and with exports expanding relatively slowly to about $10 billion, trade imbalance in India-China trade grew to $23.1 billion.

These numbers may not imply an actual reduction in the sourcing of products from China, since coinciding with the reduction in imports from the mainland, imports from Hong Kong have seen a significant increase. As an entrepot, Hong Kong has long served as the gateway for the distribution of China’s products to the rest of the world. Hong Kong imports products from China and then re-exports them to their final destinations.

An earlier study reported that during 1988 and 1998, 53 percent of China’s exports were distributed via Hong Kong.[1] In more recent years, some reports have indicated that there are other motivations, including tax avoidance, of routing Chinese exports through Hong Kong.[2] An increase in India’s imports from Hong Kong needs to be also seen in the light of the aforementioned. 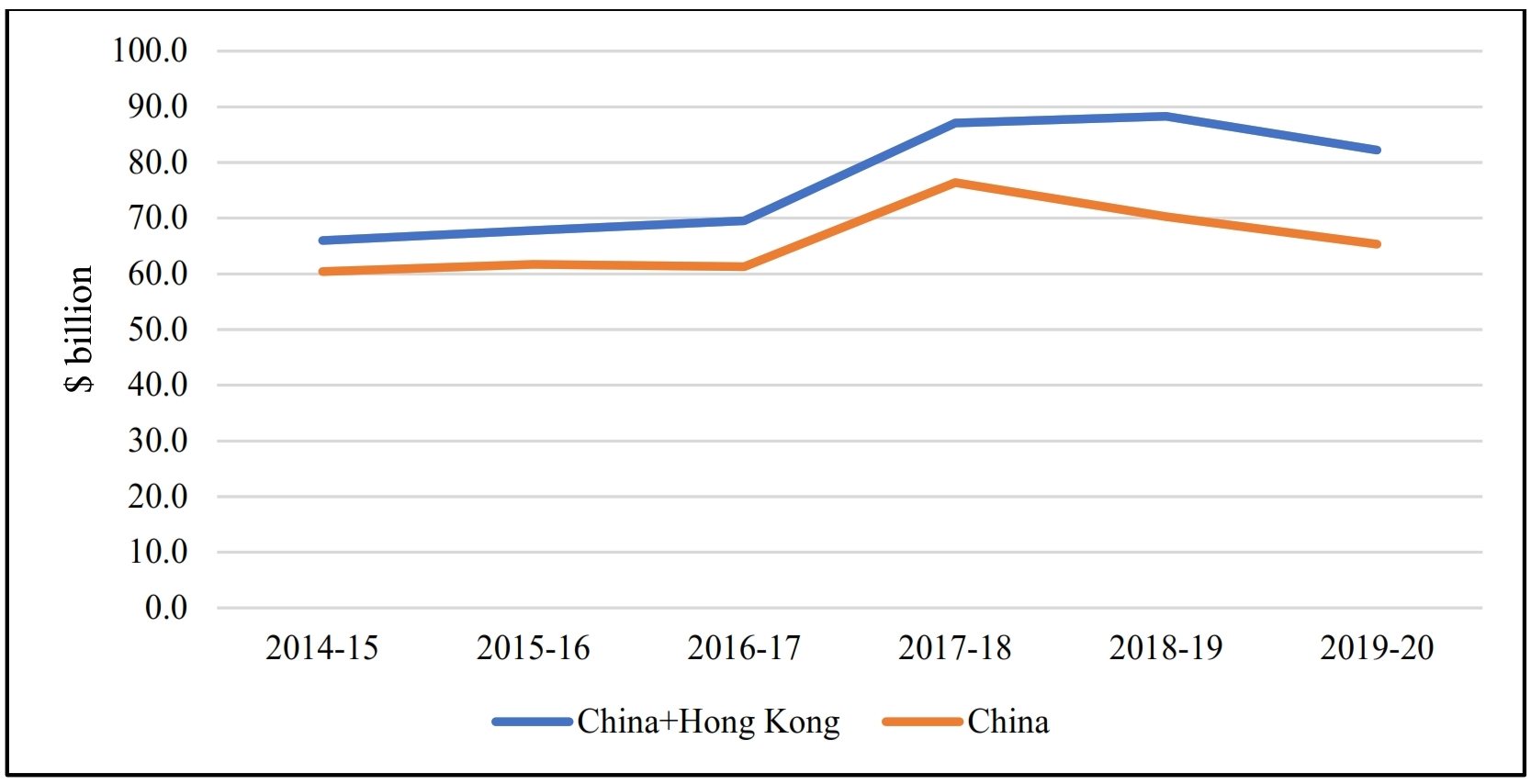 India Imports a Wide Array of Goods from China

India’s dependence on Chinese imports covers a wide range of products, from nails and umbrellas to electronic products and pharmaceutical intermediates. Imports of these products are dependent on Chinese suppliers (Table 1). But it is India’s reliance on Chinese imports in two product groups, namely, telecom and electronics products and Active Pharmaceutical Ingredients (APIs) which is particularly disconcerting, given the criticality of these sectors for the Indian economy. 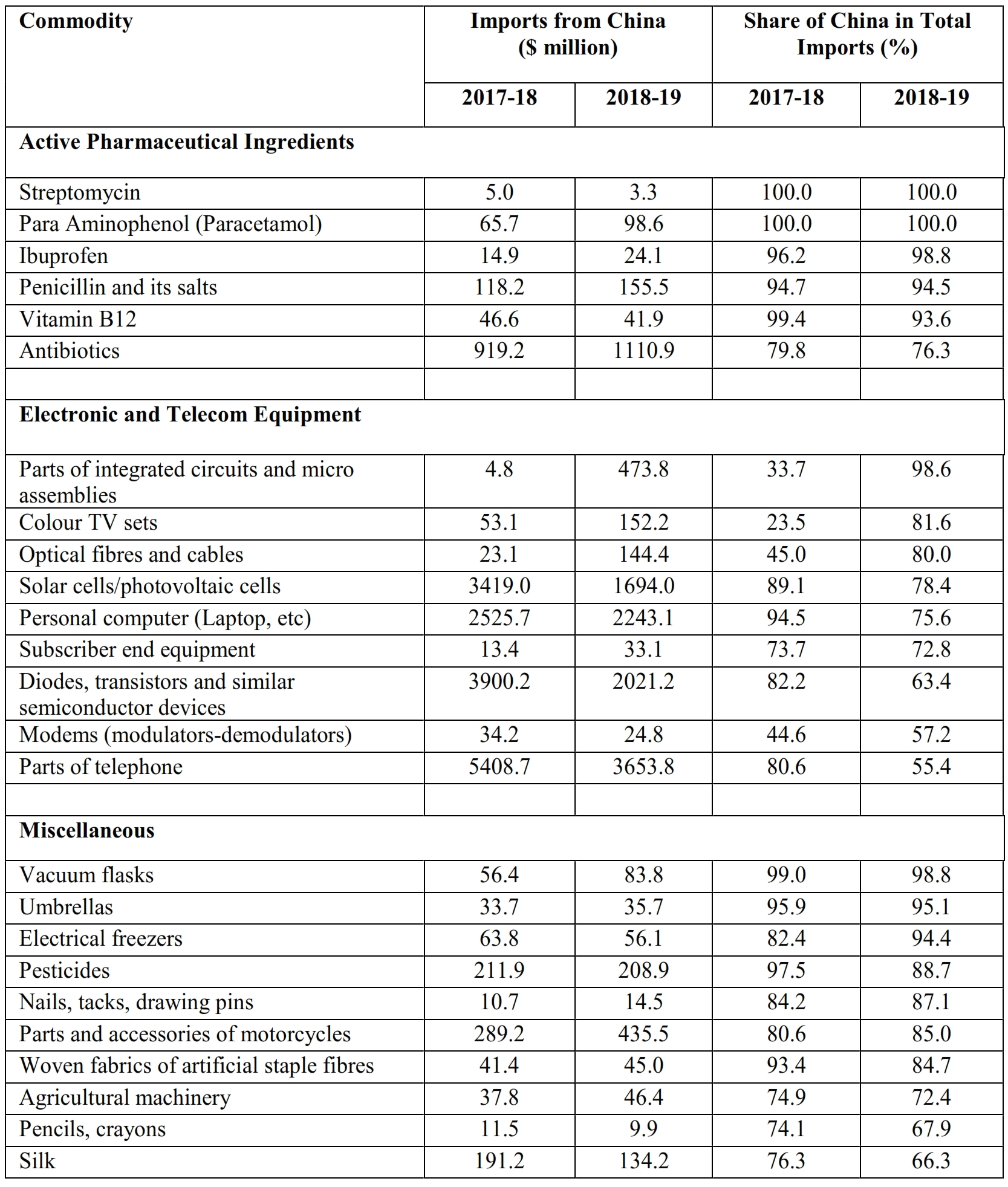 The importance of telecom and electronics products has increased manifold over the past few years after the government initiated the Digital India programme in 2015, which “is a flagship programme of the Government of India with a vision to transform India into a digitally empowered society and knowledge economy.”[3]

More important is India’s dependence on China for the APIs, which have helped the Indian generic manufacturers to provide cheap medicines, not only in India but to many countries in both developing and the developed world. China supplies more than 90 percent of the APIs for several antibiotics and vitamins (Table 1), which implies that India does not have an alternate source for meeting its API requirements.

Dependence on a single country for critical products in such a large measure can never be the right strategy, especially for a country like India having a huge demand for these products. This situation, therefore, needs to change, but this can happen only through the adoption of policies that can help change to a new normal. For so doing, India’s policymakers must reflect on what they should have done, but did not, during the past decade and a half, which is now causing so much of consternation within the country. If lessons are not learned, then, as the adage goes, the country would be left to repeat the same mistakes.

What explains this sustained expansion of imports from China? Two mutually reinforcing sets of developments explain the above numbers. The first was the fast-tracked trade liberalisation resulting in the lowering of average import duties on industrial products from 33 percent in 2000 to below 9 percent in 2008. India also had to remove all the quantitative restrictions on imports, like import licensing, in 2001. An expansionist China was thus provided an opportunity, which the former grabbed with both hands.

The second development was the decision by the governments of the day to desist from taking any significant measure to prepare the industrial sector to face the challenges of an open economy. This was because the policymakers had decided to repose complete faith in the policy of removing “market distortions” through trade liberalisation and allowing the magic of the marketplace to put the economy on a virtuous path. Their target was to reduce import duties to the level of those in the East Asian region.[4] But what India’s policymakers refused to see was that these economies had adopted well-honed industrial policies, which enabled their industries to not only face import competition in increasingly open economies, but also to become globally competitive, in the process.

It was not as if India lacked advice on the urgent need to shore up the industrial sector. In 2006, the National Manufacturing Competitiveness Council[5] advised the government to take prompt measures to raise the share manufacturing in the country’s gross domestic product (GDP) to 23 percent within a decade. Thereafter, successive governments unveiled the National Manufacturing Policy in 2011 and Make in India in 2014, with the singular objective of strengthening the manufacturing sector. Still, ironically, the share of manufacturing in GDP has remained stuck between 15 and 17 percent. Someone needs to explain why these initiatives failed to deliver.

What is entirely inexplicable is that despite the body blow being suffered by the domestic manufacturing industry because of being thrust into import competition without the requisite preparation, successive governments have been deepening the process of import liberalisation through free trade agreements (FTAs).

India’s three major FTAs, with the Association of Southeast Asian Nations (ASEAN), Korea, and Japan, have resulted in the increasing trade deficit, almost entirely because its exports have remained sluggish, while imports have expanded because of market opening.[6]

In recent years, there was a strong push from within the government to join another FTA, the Regional Comprehensive Economic Partnership (RCEP), which includes China. Academics and activists had cautioned about the adverse consequences of eliminating import duties on a large number of products, thus enabling China to expand further in the Indian economy at the expense of the domestic manufacturing industry. When the Prime Minister was finally persuaded from joining the grouping in November, the officials responded that this was a “missed opportunity” for India. Today, the country would have been left to rue the day it would have joined RCEP.

Besides offering lower tariffs to Chinese imports, RCEP would have also impacted the government’s ability to scrutinise foreign investors from China, a policy that it had introduced in April this year. The proposed RCEP includes an investment agreement, which limits the autonomous policy space of the participating governments to regulate investments.

The Government of India had unilaterally given up scrutinising foreign investment in 2017 by significantly deregulating the Foreign Direct Investment (FDI) regime, which it did by disbanding Foreign Investment Promotion Board (FIPB).

The liberalisation of FDI policies that began in the 1990s, and which gained momentum in the previous decade, was yet another nail in the coffin for the manufacturing sector. Companies already weakened by adverse import competition became easy targets for foreign investors. This was evidenced by the steeply increasing cases of take-overs of Indian entities.

The scale of Chinese investments in India is unclear, as official agencies from China and India give widely varying numbers. While the Department for Promotion of Industry and Internal Trade puts the figure at over $2 billion, China’s official agencies have put the value at $8 billion. But as in the case of trade, Chinese investors have a dominant position in India’s unicorns that are also an integral part of the gig economy. The latter has often been lauded by the government as having the potential to address India’s unemployment problems. As in the case of China’s imports, investments from the country seem irreplaceable for the unicorns. The political uncertainty could, therefore, put the future of these companies in some doubt.

With the government now emphasising on ‘national self-sufficiency’, it could take lessons from an essay that John Maynard Keynes had written at the height of the Great Depression, bearing the same title:  “Ideas, knowledge, science, hospitality, travel these are the things which should of their nature be international. But let goods be homespun whenever it is reasonably and conveniently possible, and, above all, let finance be primarily national.”[7]

Biswajit Dhar is a Professor of Economics at the Centre for Economic Studies and Planning, School of Social Sciences, Jawaharlal Nehru University, New Delhi. K.S. Chalapati Rao is a Visiting Professor at the Institute for Studies in Industrial Development, New Delhi.