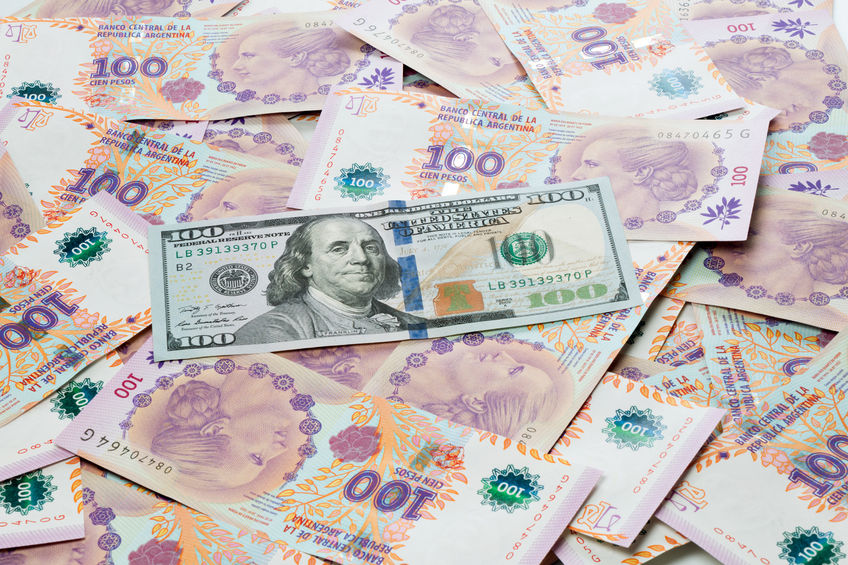 On May 4, the Banco Central de la Republica Argentina, the country’s central bank, raised policy interest rates to a whopping 40 percent to stem the rapid depreciation of the national currency, the peso. The surprise rate increase was the third in a week after the central bank failed to halt the decline in the peso by spending $4.3 billion of foreign exchange reserves in just one week. In addition, the Argentine authorities reduced fiscal deficit target and announced new measures to calm the markets.

Market observers were confident that rapid-fire rate hikes and other measures will restore currency stability, but the Argentine peso plunged more than 5 percent to a new all-time low at 23.5 against the US dollar on May 8, thereby prompted the government to seek financial support from the International Monetary Fund (IMF).

It is yet unclear what kind of financial support will be sought from the IMF, but it may entail substantial political cost as many Argentines blame the IMF policies for exacerbating the financial crisis of 2001 which deepened the recession and triggered social unrest and political instability. Since the IMF loans usually come with tough conditions and policy surveillance, the Mauricio Macri government will find it hard to garner popular support given the widespread scepticism in the country towards the IMF.

However, one thing is clear: the impacts of rates hike would be immediately felt by the real economy in terms of higher financing costs and contraction of economic activity in Argentina for some time.

What Caused the Currency Crisis?

The current bout of currency volatility in Argentina was triggered by a surge in the US dollar along with market expectations that the Federal Reserve might raise interest rates more aggressively than previously expected ‒ due to rise in bond yields and poor US inflation data. To some extent, the imposition of 5 percent capital gains tax on LEBACs (peso-denominated central bank notes) held by foreigners also added a downward pressure on the Argentine peso.

An exogenous tightening of global financial conditions coupled with a reassessment of global risk by foreign investors made Argentina’s economy extremely vulnerable because of its heavy reliance on external borrowings in foreign currency (mainly from federal government); a large current account deficit that has been financed mostly by debt inflows; and high inflation rate, currently at 25.4 percent.

Although the ongoing currency turmoil in Argentina has not yet developed into a run on the banking system or a full-blown financial crisis but it has evoked memories of past episodes of currency and financial crises in EMEs such as Mexico (1994); East Asia (1997); Russia (1998); Turkey (2000); and Argentina (2001).

Argentina: From Darling to Dud

The current market turmoil may have come as a surprise to the investor-friendly government of President Mauricio Macri. After coming to power in late 2015, his government dismantled foreign exchange controls and trade restrictions; adopted inflation targeting with a freely floating exchange rate; settled disputes with private foreign creditors; reduced subsidies on public services; and undertook other market-friendly reforms to re-join the global capital markets.

From the IMF to global business leaders, all praised pro-market reforms introduced by the Macri government. Just four months back, the IMF in its 2017 Article IV Consultation with Argentina (issued on December 29, 2017) stated: “The authorities should be commended for removing FX controls and trade restrictions that severely limited Argentina’s integration into the global economy.”

In the financial world, there was a lot of excitement when the government launched market-friendly reforms. Foreign investors poured billions of dollars in equity and debt markets. Argentina returned to global bond markets after a 15-year hiatus following the sovereign debt default in 2001. In April 2016, Argentina sold $16 billion of dollar-denominated sovereign bonds in the international markets. Most of the funds raised through these bonds were used to pay off holdout creditors from 2001 default.

In June 2017, Argentina sold $2.75 billion of dollar-denominated 100-year bonds with a coupon of 7.125 percent. Flushed with ample liquidity unleashed by quantitative easing policies of advanced countries’ central banks, pension funds, hedge funds and other institutional investors bought these so-called “century bonds” on the expectations that this time things are going to be different.

Is the worst over for Argentina? In a word, no. Financial markets will remain volatile throughout the year largely due to exogenous factors while the prospects of a drastic reduction in inflation rate and fiscal deficit are bleak in Argentina.

In the present context, the imposition of foreign exchange controls may be appropriate to stem rapid capital outflows, but it is unlikely that President Macri may contemplate such a policy move because dismantling of capital controls was one of his key election promises.

Argentina is Not Unique

Argentina is not the only emerging market economy facing excessive exchange rate volatility and sudden change in investor sentiment. Other EMEs remain vulnerable to global risk factors such as rising interest rates in the US, higher oil prices, growing trade tensions between US and China, and heightened geopolitical tensions. In case these risks fully materialize, they could trigger massive capital outflows from EMEs, particularly from those economies that have received large portfolio inflows in the post-crisis period.

An exogenous tightening of global financial conditions and an abrupt change in global risk appetite could prove disruptive to EMEs, leading to “sudden stops” or reversals in foreign capital inflows. Unlike advanced economies, EMEs are more prone to risks of “sudden stops” as they lack the capacity to borrow externally in their domestic currencies.

Countries like Turkey, Brazil, India, and Indonesia with sizeable current account deficits are more vulnerable to financial shocks emanating from abrupt changes in the dollar funding conditions. For a country like India, a stronger US dollar coupled with higher oil prices would be a double whammy for its economy. The Indian rupee is the worst performing among a dozen Asian currencies. It declined 3.4 percent against the US dollar during one-month period (March-April 2018). No wonder, the foreign portfolio investors have pulled out $2.4 billion from Indian equities and debt markets in the first week of April 2018.

The EMEs need to stay extra vigilant as prospective risks emanate from the normalization of monetary policies in the US and other advanced economies. In the aftermath of global financial crisis, the massive surge of capital flows to emerging markets was largely driven by ultra-low global interest rates and the high liquidity resulting from the quantitative easing (QE) policies adopted by the US and other advanced countries. Foreign investors were attracted to the higher rates of return and brighter growth prospects in EMEs.

As the US Federal Reserve begins tightening its monetary stance that will eventually raise interest rates, it could exacerbate financial vulnerabilities in EMEs for the simple reason that emerging economies are presently far more interconnected with the global financial system than a decade ago. This means that the monetary “policy normalization” shock can quickly turn into a significant financial turmoil in EMEs.

This is nothing new. It is a familiar story. In mid-2013, for instance, several EMEs experienced a sharp withdrawal of private capital flows over the prospect of imminent tapering of the US Federal Reserve’s policy of QE program. The so-called “taper tantrum” led to a sharp sell-off in equities, bonds, and other financial assets in EMEs which put downward pressure on their currencies. The Indian rupee suffered the largest decline among the Asian currencies, depreciating by 23 percent between May-August 2013. The South African rand and the Brazilian real also touched four-year lows against the US dollar in June 2013.

In recent years, many EMEs have improved their foreign exchange reserve holdings as a buffer against external financial shocks. Even though “self-insurance” via foreign reserve accumulation is the still dominant strategy of EMEs but it has several well-known drawbacks, therefore, there is a need for better policy alternatives.

In many important ways, the ongoing currency turmoil in Argentina has shown that freely floating exchange rates do not always guarantee insulation from external shocks.

Due to lack of global policy coordination, EMEs should further improve their macroeconomic and financial regulatory frameworks to cope with external financial shocks. The emphasis should be on developing sound policy frameworks tailored to national circumstances. This may entail close monitoring of financial markets to identify the potential contagion channels that can transmit US monetary policy shocks to EMEs. Besides, EMEs should not hesitate to take swift policy action by deploying capital controls and macroprudential tools to limit systemic risk.

Needless to add, unlike advanced economies, EMEs have limited capacity to deploy countercyclical fiscal and monetary policies in the event of a financial crisis.

In the current circumstances, the substantial rise in corporate debt burdens in EMEs in recent years also warrants vigilance. Private sector debt issued in a foreign currency needs to be monitored very closely as it exposes borrowers to foreign currency risks. Unlike local-currency debt, foreign-currency debt is considered riskier as exchange rate depreciation can make it difficult for private firms to service their debts if they do not have income or assets in a foreign currency. Besides, high levels of foreign-currency private debt could have wider implications for financial stability and economic growth in EMEs in the light of economic slowdown.

In the aftermath of global financial crisis, bulk of debt build-up in EMEs was driven by non-financial corporations (NFCs). Taking advantage of ultra-low interest rates and easy global financial conditions, NFCs in EMEs issued foreign-currency debt in international markets. The CaixaBank Research has calculated that, on average, 44 percent of emerging corporate debt was in a foreign currency at year-end 2016. According to Fitch estimates, foreign-currency corporate debt as a share of GDP was highest in Turkey at 41 percent, Russia at 37 percent, India at 17 percent, and China at 10 percent in end-June 2015.

The post-crisis surge in the issuance of corporate bonds by NFCs in foreign currencies (mostly US dollar) has rendered EMEs more vulnerable to external financial shocks. A strong dollar and sharp hike in the US interest rates will adversely affect the balance-sheets of NFCs that have issued dollar-denominated corporate bonds without properly hedging currency risk. It is important to note that not many NFCs in EMEs have hedged their foreign currency liabilities through natural offsets or by using financial derivatives such as swaps. The depreciation of local currencies against the US dollar will make it difficult for NFCs to service their foreign-currency debt.

Another point to consider: the exchange rate volatility has made the risk of currency mismatch more evident for those NFCs that have created large liabilities in dollars by issuing dollar-denominated corporate bonds, but their assets and revenues are denominated in local currencies. The Asian financial crisis of 1997 has highlighted the problems associated with the twin currency and maturity mismatches that triggered the crisis.

The highly leveraged corporates from Turkey and Brazil plus those involved in non-tradable sectors (real sector, construction, and infrastructure) are among the most vulnerable to such risks.

It is well understood that cross-border systemic risks in an increasingly complex and interconnected global financial system cannot be addressed by national regulators alone. Consequently, there is a scope for global policy dialogues and coordination mechanisms to safeguard macroeconomic and financial stability.

International cooperation is also crucial for global welfare because international spillovers have now become a two-way street and therefore can engender financial fragility in both source and recipient countries.

Some may argue that G20 is well-positioned to address cross-border systemic risks because of its overarching mandate to strengthen financial regulation but the previous G20 summits have delivered very little in terms of meaningful dialogue and policy coordination on these matters.

Will Argentina and other emerging market members of G20 take the lead in putting these issues on its agenda and build a consensus for greater policy coordination at the next G20 Summit that will be held in Buenos Aires at the end of 2018?