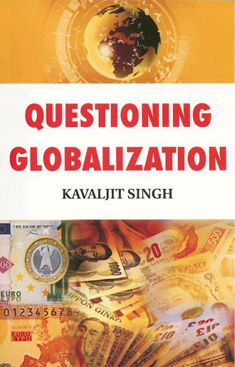 Globalization has become the cliche of our times. The neo-liberal virus has struck almost everybody including within the ranks of the left. The proponents of neo-liberal globalization claim that it produces “accelerated efficient” development along with deepening of democracy and human rights. However, reality shows the opposite and any rigorous examination of such frivolous arguments reveals their shallowness and inconsistency. Social progress and democracy cannot move ahead but jointly and on the condition that we move away from the dogmas of neo-liberalism.

The book underscores that the current disasters are not the “price” to pay for a transition towards the promised paradise, but on the contrary are bound to deepen as long as neo-liberal economic policies are pursued. With the help of case studies, statistical data and cogent analysis, the book debunks several myths associated with the globalization processes.

“Questioning Globalization is needed. Kavaljit Singh has produced a most convincing book on globalization issues. He writes in a clear non-jargon style accessible to all policy and opinion makers. I highly recommend the book to all activists including
those who are already convinced that neo-liberalism must be defeated.”
Samir Amin, Director, Forum Tiers Monde, Senegal
“Kavaljit Singh has written a brilliant and succinct series of responses to a number of basic questions which have academic
and political relevance. This book will serve as a valuable text for all readers interested in the political economy
of globalization and imperialism, aid and governance, and the role of the nation-state.”
James Petras, Professor Emeritus, State University of New York, US
“Indeed, this book, along with Kavaljit’s earlier one, Taming Global Financial Flows, should be essential study material for those
who are seeking answers to the processes governing globalisation. They offer an excellent critique of the ruling orthodoxy
that justifies, defends and promotes globalisation on a world scale. It is also an antidote to the sense of despondency
that the orthodoxy promotes, that globalisation, in its current form, is unstoppable or even irreversible.”
V. Sridhar, Frontline
“The anti-globalist point of view is often restricted to the outer fringes of the media. It is for this reason that Kavaljit Singh’s book is important, because it tells the other side of the story, and sometimes leads to startling new insights.”
Manas Chakravarty, Business Standard

“This is a useful addition in the emerging critical literature on globalization and the book’s primary strength is that it is accessible
to a lay yet informed person who wants to look for facts and understand arguments about some of the popular
myths being branded in the name of globalization.”
Rahul Varman, Economic and Political Weekly

“Singh’s objective was to write a non-technical popular book which could be easily comprehended by students, activists and
concerned citizens and in that he has been successful.”
Business India

“In easily-understandable language, Kavaljit Singh aims to show why the current form of globalization is neither
beneficial nor unavoidable.”
Frontier

“Although one may find it extremely difficult to agree with Singh and his hypothesis elaborated in his book, Questioning Globalisation,
the fact is that the author has managed to express a view point which is not easy to dismiss.”
Financial Express

“The book inspires a serious debate in the mind on a subject, which today attracts attention across the globe with diverse implications.”
The Hindu

“Singh has produced an important compilation and distillation of the key debates surrounding globalization for activists,
students and the general public. This book would serve as a useful starting point for each of these groups
and is ideally suited as an introductory text for university students.”
Development and Change