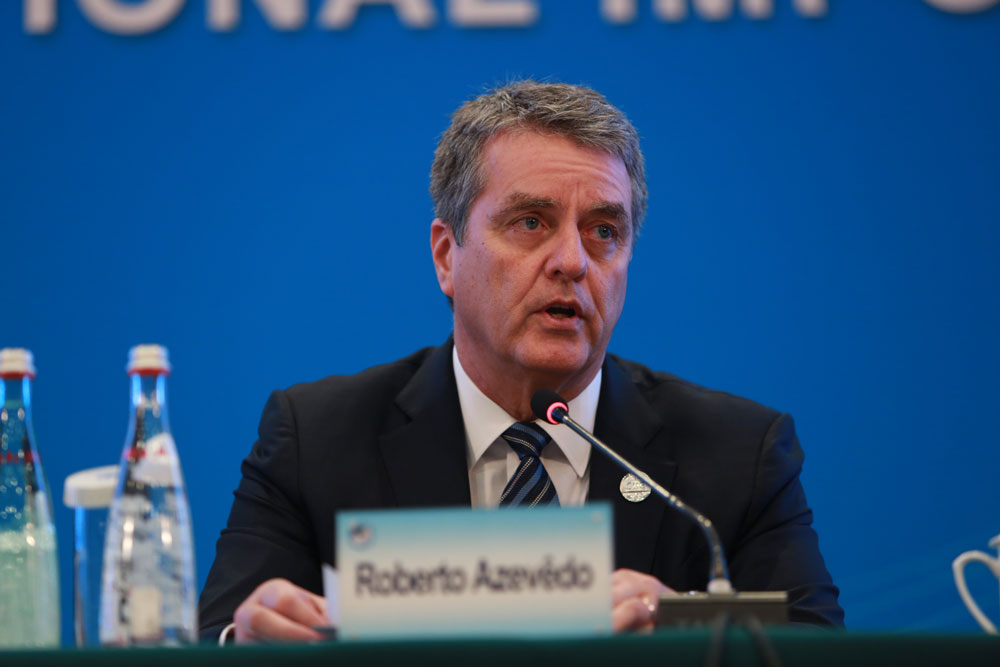 The decision of the Director-General of the World Trade Organization (WTO), Roberto Azevedo, to demit office a year before the expiration of his second term, confirms the long-held view that the multilateral trading system is facing an existential crisis. This rules-based trading system was established by the General Agreement on Tariffs and Trade (GATT) to create an open and a non-discriminatory trading system in order to raise standards of living, ensure full employment and support steadily growing volume of real income and effective demand.

However, there have been unmistakable signs in recent years that the WTO was failing to fulfil its task through a holistic engagement of its membership. The spirit of multilateralism seems to have taken a back seat, as plurilateral engagements increasingly became the norm. The tenure of Director-General Azevedo saw this unseemly transformation of the multilateral trading system.

The Sixth Director-General of the WTO took office in 2013 when by his own statement during his inaugural address to the Organization’s General Council, highest-level decision-making body in Geneva, the multilateral trading system was in trouble. This was indeed the case as the negotiating arm of the WTO was all but frozen since the onset of the Great Recession in 2008. This effectively meant that no progress could be made on the Doha Round negotiations, which, in many ways was more significant than the Uruguay Round that led to the establishment of the WTO. This was because the Doha Development Agenda, the negotiating agenda of the Doha Round, encapsulated the spirit of multilateralism in two fundamental ways. First, the Agenda included, in a good measure, the needs and aspirations of the economically weaker nations. And, secondly, almost all members of the WTO were fully engaged in the negotiations, making efforts to use the trading system to raise the standards of living of their populations, as was intended to by the founders of the multilateral trading system.

Importantly, during Azevedo’s tenure as Brazil’s Chief Negotiator in the WTO between 2006 and 2008, developing countries were engaged in serious negotiations to alter the balance in some of the major agreements, including the Agreement on Agriculture (AoA). For the first time in the history of the GATT/WTO, developing countries had forged coalitions to present an effective counterweight to the United States and the European Union, the main beneficiaries from the AoA. One of the key coalitions was forged between developing countries that had conflicting interests in agriculture; it included Brazil, which was an exporter of agricultural commodities, and India, whose concern was to protect its domestic market. But, despite their apparent differences in perspectives, this coalition was able to persuasively argue for several amendments in the AoA for lowering subsidies and strengthening the provisions relating to food security. The political masters and the diplomats could make such a coalition possible. However, the then Director-General, Pascal Lamy, who was the former Trade Commissioner of the EU, played an active role to ensure that progress could not be made in the negotiations, particularly at a critical juncture just prior to the onset of the recession in 2008. Lamy, who had frequently described the WTO as a “member-driven organization”, over-rode the views of the developing countries and made his opinion as the head of the Secretariat of the WTO count. The result of this move was an impasse in the negotiations.

Lamy’s proactiveness in effectively stalling the progress of the Doha Round negotiations, and that too, at a crucial juncture, was of course not the first instance of such intervention by a Director-General. Arthur Dunkel, the Director-General of the GATT during the Uruguay Round, changed the course of the negotiations completely by producing his own draft, which became the basis for all the Agreements that the WTO is currently monitoring. Given the important role that the Directors General can play in shaping the institution, the appointment of the Brazilian diplomat to provide leadership to the WTO was expectedly received with a degree of hope by the developing countries, especially regarding a favourable outcome of the Doha Round negotiations.

By the time Azevedo assumed charge as the Director-General of the WTO, the dynamics of the Organization had completely shifted. In the run-up to the Bali Ministerial Conference at the end of 2013, the focus was now on two issues, public stockholding for food security purposes and trade facilitation. The former issue was backed by the G-33, a group of 46 developing countries coordinated by Indonesia, and was of immense importance to countries like India, which used public stockholding of food grains for supporting domestic food aid programmes. This issue assumed criticality since the AoA required countries using this mode of food aid delivery to include such food subsidies in their overall subsidies bill, which could not exceed 10 per cent of the value of agricultural production. The implication of this “discipline” meant that the implementation of India’s National Food Security Act would be constrained. This issue.

One of Azevedo’s early comments on the G-33 proposal revealed his own position quite unambiguously. In his statement in the informal Trade Negotiations Committee meeting within a month of his taking over as Director-General, Azevedo stated thus: “Before I took office and in my first few days in office, I was extremely concerned with this issue because we did not even have a conceptual understanding of what kind of solution we were going to explore”[1] (emphasis added). The G-33 proposal was being discussed for nearly a year and the Director-General’s lack of appreciation of its merits less than three months before the Ministers were to take a decision on it in Bali, was an indication of his bias against the developing countries, which became increasingly evident in the later years.

The Demise of the Doha Development Agenda

The Bali Ministerial Conference proved to be an important landmark for it became the beginning of the end of the Doha Development Agenda. Under Azevedo’s Chairmanship, the General Council “cherry picked” some elements of the Agenda for inclusion in the “Bali package.” The focus was eventually on two issues, trade facilitation and public stockholding for food security purposes, in both of which the membership was expected to accept binding commitments. An Agreement on Trade Facilitation was backed by members with significant trade interests, but most developing countries were against this agreement for its implementation would impose significant financial burdens, especially because customs infrastructure would need upgradation. On the other hand, a few advanced countries were unwilling support public stockholding programmes that developing countries were implementing for providing domestic food security. This polarisation impacted the outcome of the Bali Ministerial Conference with the Conference ending any tangible outcomes and also without a work programme for the WTO.

Azevedo can surely take the credit for overseeing the adoption of the Agreement on Trade Facilitation in 2015 after developing countries were made offers of financial assistance to meet their commitments under the Agreement. The issue of public stockholding for providing domestic food security was left with a rather tenuous “solution”; WTO members agreed that they would not initiate a dispute against a country whose subsidies exceeded the 10 per cent threshold while implementing the food security programmes.[2]

The post-Bali developments would certainly mark a low point for the multilateral trading system for the development issues that were progressively upstaged by the market access agenda favouring the dominant players in the global markets. The organisation took the first initiative towards this end by effectively ending the Doha Round at the Nairobi Ministerial Conference in 2015 when no consensus could be reached amongst the membership to continue the Round. The Director-General, who had mentioned before the commencement of the Ministerial Conference that “everything [the Membership was] negotiating before — in the context of the Doha Round — was back on the table,”[3] remained non-committal after the Doha Round was de facto discontinued.[4] This meant that the negotiating arm of the WTO, using which the entire membership of the organization was engaged in the Doha Round negotiations, was made dysfunctional.

Over the past three years, the WTO actively pursued a market access agenda that was supported by less than half of the membership of the Organization. The two major issues deliberated upon were electronic commerce and investment facilitation, and on both of these there was no consensus among the members to include them in WTO’s work programme. The Director-General became an active facilitator in promoting informal dialogues between a group of members, thus undermining the principles of engagement in a multilateral institution. Much like his predecessors from the advanced countries who did not allow the WTO to realise its objectives of development for all, Azevedo also contributed to making trade rules respond to the aspirations of the economically powerful countries.

While Azevedo had contributed to the withering away of the multilateral negotiating arm of the WTO, the other important function of the organization, namely, its Dispute Settlement Mechanism (DSM), was taken away by the United States. Azevedo considered the settlement of disputes as to the singularly important aspect of WTO’s success as an institution[5] as did his predecessors.[6] The Director-General credited the “efficient and effective dispute settlement mechanism” for the help in curbing “potentially disastrous protectionist forces during a dangerous period for the global economy.”[7]

The largest trading nation, the United States, had long been critical of the functioning of the DSM.[8]  But, under the Trump Administration, its suspicion escalated manifold.[9] President Trump took an extreme position against the DSM when he stated, “We never won with the WTO, or essentially never won.”[10] The President’s view was, however, incorrect as the United States had won 91 per cent of the cases it had filed in the WTO.[11]

Azevedo is leaving an Organization that has almost been reduced to irrelevance, but the question that will be asked is whether the death-knell for the multilateral trading system has also been sounded.

The irony is that the developing countries, for whom multilateralism is most relevant since it allows them to provide a collectively negotiate on issues of their interests, have allowed the dominant economic powers to dismantle the institution.

As the global economy prepares for a fundamental reset in the post-COVID world, the relevance of multilateral institutions would increasingly be felt by the developing world. These countries must ensure that the WTO finds a new Director-General who is willing to stand by the fundamental principles of development and equity, which are integral parts of the Marrakesh Agreement.

[9] USTR (2020), Report on the Appellate Body of the World Trade Organization, February, accessed from: https://ustr.gov/sites/default/files/Report_on_the_Appellate_Body_of_the_World_Trade_Organization.pdf.

[10] For details, see Whitehouse (2019), Remarks by President Trump and President Mattarella of the Italian Republic Before Bilateral Meeting, accessed from: https://www.whitehouse.gov/briefings-statements/remarks-president-trump-president-mattarella-italian-republic-bilateral-meeting.